True and PSI team up for satellite scheme
Tech

True and PSI team up for satellite scheme 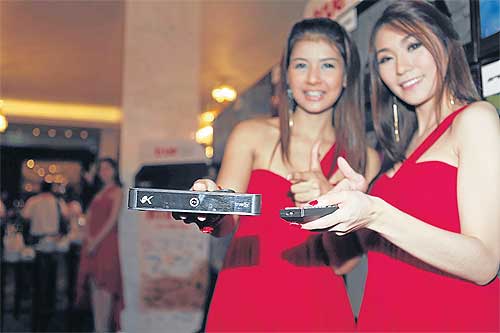 Models show off the PSI-True TV satellite box, a joint venture between True and PSI in the receiver segment. SURAPOL PROMSAKA NA SAKOLNAKORN

"We have been talking about the development of the box for several months, and now is a good moment to roll it out as a new season of English Premier League football will kick off soon," he said.

PSI is the market leader for satellite TV service providers. Its satellite dish uses the C-band system, while TrueVisions uses the KU band.

Anat Mekpaiboonvatana, managing director of TrueVisions, expected 300,000 boxes will be sold this year. After that, around 100,000 boxes are expected to be sold monthly.

The box costs 890 baht, while a package of the set-top box, a satellite dish and the installation fee is 1,990 baht with no monthly fee. The box will offer 100 channels from both TrueVisions and PSI. This is lower than other boxes in the market, said Mr Ong-ard.

Revenue from box sales will go to PSI Holding while TrueVisions will enjoy a larger audience base.

"This is a win-win as we gain more partners," said Mr Ong-ard.

Though GMM Grammy's GMM Z and the RS Sunbox have entered the market recently, he is confident the PSI-True TV box will be attractive.

Highlights include the English Premier League, the Thai Premier League and other international football leagues. TrueVisions also launched a new Channel 10 that Mr Ong-ard called a "killer" because it will present some of the most popular programmes from TrueVisions.

Some 10 million households in Thailand still use antennas and they will soon change to satellite TV, so we see potential, said Mr Ong-ard.

TrueVisions earlier introduced the True Life Plus box, a set-top box with no monthly fee that offers selected programmes from TrueVisions.