The roots of health care
Business

The roots of health care

Foundation's mission is to spread the word about traditional herbal medicines.

The advent of Western medicine in Thailand about 100 years ago precipitated a decline in traditional herbal medication. Locally made remedies came to be considered backward and were forsaken in favour of the imported medicines that began to feature prominently in the local health care system. 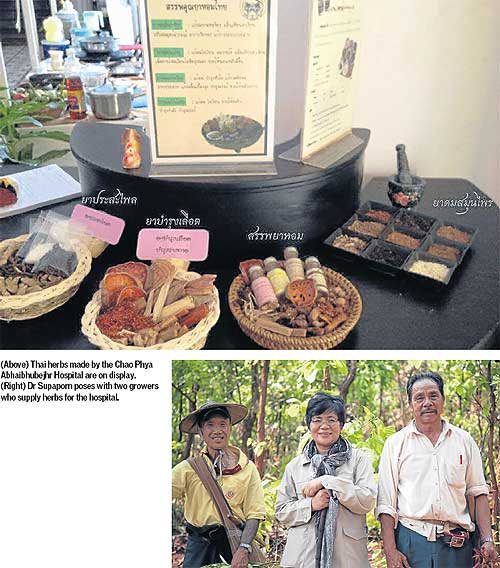 Despite attempts to revive traditional medicine in the 1970s, imported Western medicine remains the standard panacea for illnesses at most hospitals.

Against this backdrop, it is ironic that there exists in this country today an institution that produces traditional herbal medicines and cosmetics and uses the profits generated from their sales to fund a hospital that relies on more mainstream medications.

This institution is none other than the Chao Phya Abhaibhubejhr Hospital Foundation (CAF).

Founded as a non-profit agency, the CAF has propelled itself into a social enterprise, running the Abhaibhubejhr herbal product line.

"We were very troubled by the fact that Thai society had become so reliant on these very expensive and imported Western medicines, to the point that we were losing touch with our local knowledge of traditional herbal remedies," said Supaporn Pitiporn, the 51-year-old chief pharmacist and mastermind behind the Abhaibhubejhr brand.

Dr Supaporn, who is also the chief executive for Thai wisdom development, one of the hospital's three departments, said the CAF's ultimate goal is to rediscover traditional wisdom and bring back the use of herbs in Thai society.

"Selling products, be they medicines or cosmetics, is just a tool to achieve our end goals," she said.

At the behest of the World Health Organization, the Public Health Ministry asked all local hospitals to explore traditional alternatives to medications in the late 1970s. Dr Supaporn was at the time on Abhaibhubejhr Hospital's pharmacy staff, which had extensively researched the use of plants by traditional healers. From that point on, plant-based medicines were developed for use in the hospital.

Commercialisation of the products happened by chance, triggered by the repercussions of the 1997 financial crisis.

"We found that people who had been made redundant were buying our products and reselling them upcountry. So we thought it would be helpful to make them available to the public at affordable prices," said Dr Supaporn.

Abhaibhubejhr Hospital has changed the lives of many people, not least the farmers who directly supply the herbs and plant materials.

"We could have bought the herbs from anywhere or hired anyone to grow them but decided instead to buy from local villagers in the hope of encouraging them to take up organic farming instead of risking their health with cultivation that relies on harmful chemicals," said Dr Supaporn.

To become a supplier, a farmer must undergo training in organic farming techniques and all the measures involved in producing the best-quality organic herbs, which fetch above-market prices. Currently, there are 10 groups of suppliers from provinces as far apart as Kanchanaburi, Chiang Mai and Maha Sarakham, with 10-30 farmers per group.

"We know that farmers usually have no choice but to sell their output very cheaply to middlemen, so we did not want to perpetuate that pattern," said Dr Supaporn.

For instance, the market rate for one kilogramme of fah talai chon or kariyat is 80-100 baht, while the CAF will pay 150 baht.

"We adhere to the principles of fair trade, so the volumes, quality and the prices of all the plant material are determined jointly along with the farmers," commented Dr Supaporn.

Revenue from sales of Abhaibhubejhr products totalled 230 million baht last year and is on track to reach 280 million this year. The CAF's social business grows by 10-15% on average each year.

As much as 70% of the net profit directly supports the hospital, which serves nearly 1,500 patients a day. Funds are used for maintenance and buying medicines not listed on the national list of essential medicines.

Some of the rest is used in campaigns to foster awareness of herbs and forest preservation. As well, farmers are assisted in producing better-quality plant materials through machinery upgrades and educational trips. The CAF has also started to fund research on tissue culture, donating 1 million baht to Mahidol University this year for this purpose.

"Getting where we are may have been a fluke, as we've never conducted market surveys to gauge demand or launched big marketing campaigns. Instead, our end-customers spread the word," said Dr Supaporn.

"People say we've done so well because we've engaged in public relations and not marketing."

She said the CAF has always been sincere in communicating with people about the usefulness of herbs and doing what it can to help those in need. For instance, the CAF chooses to stick with a less modern packaging and labelling, with the labels relaying herbal information about herbs to the consumers. Another important element is the level of commitment displayed by the staff.

Despite its success, the CAF still faces obstacles, one of which is the slow registration process for new herbal medicines. Dr Supaporn said this stems from a lack of understanding of herbal medicines on the part of the Food and Drug Administration. Over-the-counter drugs take about a month to be registered, herbal medicines a year or two.

"Difficulties are part and parcel of any business. They can be overcome, and at the end of the day social businesses will grow, as they fill in the gaps in society and address societal issues," she said.

Herbal medicine in Thailand has a big growth potential. While the conventional medicine market here is valued at 100 billion baht, that for herbal medicine is worth only 2-3 billion.

"It would be great if there could be more herbal medicine producers. It has always been our intention to spread the message about herbs, and more competition will accelerate that process," said Dr Supaporn, adding that if one day other producers can do a better job, then the CAF will phase itself out.

The CAF has no plans to export its products but rather will focus on keeping them affordable in the domestic market, with the most expensive item costing only 350 baht.

"Above all, we want Thais all across the country to be able to buy these herbal products at a good price. Then maybe we'll think about exports," Dr Supaporn added.