BLAND goes all out for Muang Thong Thani
Business

BLAND goes all out for Muang Thong Thani 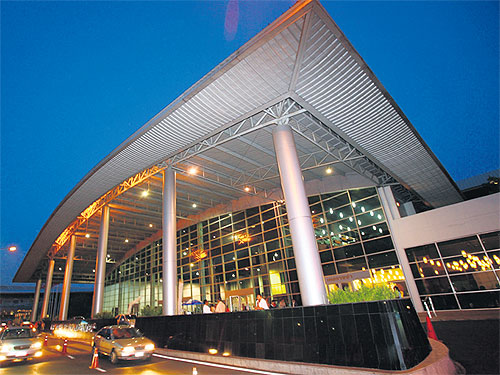 The Impact Exhibition Center, part of a suite of event and hospitality properties owned by an event management company that Bangkok Land just repurchased.

Five years ago, the fund bought the same amount of shares in Impact Exhibition Management for 7 billion baht.

"Despite selling at a loss, the fund wants to sell the shares back to us, as it just needs to dissolve," Mr Anant said during his first meeting with the media in two years.

It generates 1 billion baht a year and can help Bangkok Land pay dividends to shareholders once it owns 100%.

There are two options, the first being a joint venture with the Mass Rapid Transit Authority of Thailand (MRTA).

For this option, Bangkok Land will offer a 20-rai site for the MRTA to build a mass transit depot at Muang Thong Thani connected to the Pink Line.

The company is negotiating spending 600 million baht _ half the total investment _ on the depot construction.

"This proposal will be submitted to the cabinet soon," Mr Anant said. "If it is rejected, we will invest 600 million baht to build a monorail in Muang Thong Thani linked to the Pink Line."

The 2-billion-baht outlay is to develop three projects in the next few years.

One of them is BeeHive, a two-storey neighbourhood shopping centre with a total lettable area of 8,340 square metres on a six-rai plot opposite Sukhothai Thammathirat Open University. The project began construction this month and will finish in late 2013.

The other two projects will be shophouses for sale and rent in two locations: Easy Promenade behind Impact Hall, worth 650 million baht; and Festival Walk near Kasikornbank's Muang Thong Thani branch, worth 300 million baht.

Late last year it launched the first phase of the Double Lake condo project with 499 units starting at 1.95 million baht for sizes from 32 square metres. With 80% of those sold, the second and third phases with 499 units each will be launched in mid-2013.

Bangkok Land now has 750 rai in Muang Thong Thani, down from 4,500 rai before the 1997 financial crisis. This plot is the firm's second-largest land bank after a 1,350-rai plot on Srinakarin Road ending at Outer Ring Road.

It plans to sell 600 rai from this block at 12 million baht per rai. The plot will have higher potential after Chaturathit Road between Srinakarin and Rom Klao is cut through.

"We will sell some of the plots to reduce land bank holdings, and develop the rest ourselves," said Mr Anant, 71.

Bangkok Land has seven rai on New Phetchaburi Road near the Airport Rail Link's Makkasan station, where it plans to develop a convention and exhibition centre.

BLAND shares closed yesterday on the SET at 1.34 baht, up eight satang, in trade worth 693.28 million baht.