U Airlines reaches for the sky
Business

U Airlines reaches for the sky

U Airlines, a Thai startup carrier with bright orange aircraft, has announced lofty plans that have left some airline executives scratching their heads. 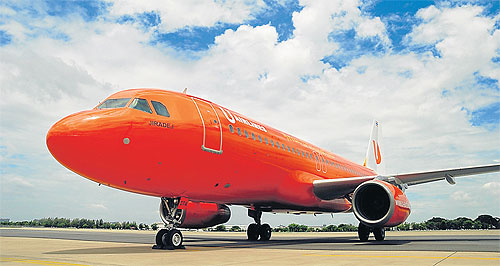 The carrier plans to have a fleet of up to 19 jets including an A380 double-decker superjumbo that will serve more than 20 domestic and international destinations as far afield as Istanbul.

But the plan, unveiled yesterday by founder and president Jiradej Worapiankul, is being looked upon as aggressive and ambitious for a new player in this highly competitive industry.

Industry insiders say this is especially true for an airline whose name was known only within a close circle only a month or two ago.

In an interview with the Bangkok Post, Mr Jiradej, who describes himself as a businessman with interests in several business including cable TV, expressed determination to proceed with the plan, which would allow U Airlines to cash in on growing air travel.

"I've been considering an airline for a long time now, and I'm convinced it is a viable proposition based on the country's open skies policy and growing global demand for air travel," he said.

Mr Jiradej said the advent of the Asean Economic Community in 2015 will also open up new airline opportunities.

U Airlines quietly took to the skies in September with the inauguration of charter flights from Bangkok to Yancheng, China, on its sole A320-200 narrow-body jet, followed by Inchon, South Korea, last month.

Its second A320-200, also pre-owned and leased, is undergoing a "C" check, whereby the entire aircraft is inspected at Garuda's aircraft maintenance centre in Jakarta.

The second aircraft will start operating sometime this month, enabling the airline to start its move from charter service alone to scheduled flight frequencies.

The airline plans to offer scheduled domestic service from Bangkok to Chiang Mai and Phuket next month before spreading its coverage to Hat Yai, Krabi, Narathiwat and Roi Et.

The airline did not provide timetables for the launch of these services.

Mr Jiradej said the airline, capitalised at 500 million baht, is funded largely from his own resources.

An industry source said U Airlines has so far operated seven flights each to Yancheng and Inchon.

Mr Jiradej said the startup positions itself between a budget carrier and a premium airline by offering "reasonable" fares with inflight services similar to that of a legacy carrier.

Its aircraft will be largely configured with two classes _ business and economy _ catering to business travellers and civil servants.

"We aspire to be the best airline in Thailand," said Mr Jiradej.

Executives of the airline said the "U" in the name stands for the word "you", and the bright orange colour was chosen to project a modern and vibrant image.

Two new cases of coronavirus disease, both quarantined returnees from the United States, raise the total to 3,516.