Large numbers of tourists have cancelled their trips to Krabi province after a video clip emerged as a sign of protest against provincial authorities who gave bail to a man accused of raping a foreign woman in Ao Nang. 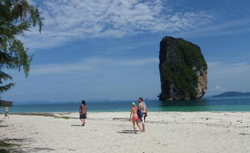 Ithirit Kinglek, head of Krabi’s tourism authority, said the video clip called Evil man from Krabi which has circulated on the internet for about two weeks has affected the province’s tourism industry.

He said many tourists from England have cancelled their trips after the video emerged on YouTube.

The content of the clip talks about several violent incidents that involved foreigners in Ao Nang and have been allegedly covered up by Thai authorities.

The clip maker is the father of a 27-year-old Dutch woman who was beaten and raped by a Thai tour guide. The guide was later given bail by the authorities.

Another incident concerned teenagers attacking a tourist couple. The man was stabbed and wounded severely while his girlfriend barely escaped with the assistance of the locals in the area.

Mr Ithirit said European tourists have questioned their safety and concerns about going to Krabi.

He said authorities in Krabi had tried to cover up similar crimes against tourists.

KIEV: A Belarusian activist who heads an NGO helping his compatriots flee repression in Belarus has disappeared in Kiev, his organisation said on Telegram.