The Satellite Television Association (Thailand) is threatening to sue the National Broadcasting and Telecommunications Commission (NBTC) if the watchdog imposes "double taxation" on satellite TV operators. 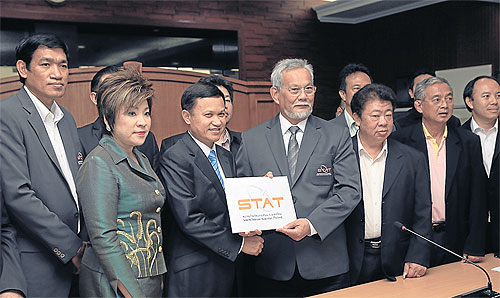 The association is preparing a petition for the Administrative Court against a new NBTC regulation imposing a licensing fee of 2% on satellite TV operators' annual revenue and a 2% universal service obligation (USO) tax on the same revenue.

"This regulation violates the law. It should be scrapped, as the rates are too high for operators," said Niphon Naksompop, chairman of the association, which comprises 90 members involved in content production.

"A final decision on whether to file the petition will be made this month."

Association secretary Pongchai Shanmartkit, who is also the TV marketing director at TV Direct Plc, expressed concern that the fees would create a barrier for the entry of new firms.

Last year alone, as many as 52 companies entered the local satellite TV market.

Mr Pongchai said small and medium-sized operators would find it difficult to survive due to the market likely being controlled by the existing 10 large providers.

Mr Niphon suggested the NBTC instead charge operators on a revenue-share basis based on the number of receivers or TV ratings.

The NBTC earlier reiterated that any operator failing to comply with the new licensing requirements by that date is at risk of being forced out of business or facing a blank screen on TV.

The commission expects to grant the first licences this month, aimed at bringing 1,000 cable and satellite TV operators in the country under the Broadcasting Act.

The non-frequency broadcasting licences will be divided into three types _ facility provider, infrastructure and channel operator _ and offered for up to 15 years.

Mr Niphon said combined local TV advertising revenue will reach 80 billion baht this year. Of the total, 70 billion baht will come from free TV and the rest from satellite and cable TV.

Col Natee Sukonrat, chairman of the NBTC's broadcasting committee, shrugged off the association's threat, saying the commission has nothing to do with the fees.

"They need to call on parliament to amend the law on adjusting the fees," he said.

Col Natee said the licence and USO fees were outlined under different laws, so it cannot be double taxation.