Authorities and major mobile operators have joined forces to speed up the rollout of public WiFi networks nationwide next year. 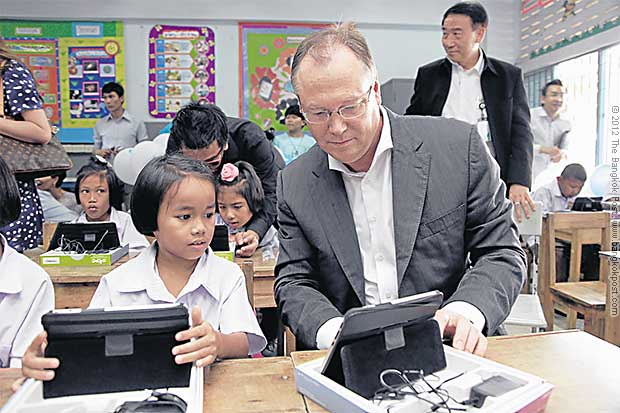 DTAC chief executive Jon Eddy Abdullah shows a young student how to access the public WiFi service. The company is participating in a project that will blanket Thailand with WiFi hotspots by 2015.

Under the 2-billion-baht project, all participants plan to install a combined 250,000 WiFi hotspots nationwide.

Gp Capt Anudith Nakornthap, the information and communication technology (ICT) minister, said the government decided to use the public-private partnership model to speed up the public WiFi network expansion.

Gp Capt Anudith said mobile operators would benefit from the nationwide network as they could offload some traffic from their 3G networks while their users are on the go.

He said the ICT Ministry also plans to spend an additional 890 million baht next year to expand the network to another 30,000 schools nationwide in support of the government's One Tablet per Child project.

Gp Capt Anudith also said the terms of reference and specifications of the tablet project for 2013 will be concluded next month.

Under the project, an additional 1.6 million tablets will be purchased for Prathom 1 and Mathayom 1 students at a cost of 4.48 billion baht.

"We plan to use an e-auction system, opening for both local and foreign suppliers," Gp Capt Anudith noted.

The Kasikorn Research Center forecasts upcoming full commercial 3G service will likely stimulate the Thai mobile industry, expected to be worth up to 215 billion baht next year. Wireless data service will make up 32.5% of the total.

BEIJING: The US is guilty of "obstructing" the global fight against emissions, China said Wednesday, as Beijing seized the climate agenda by vowing to go carbon neutral by 2060 -- a target welcomed by environmentalists despite its patchy detail.

NAKHON PHANOM: Four men were arrested and 450 kilogrammes of dried marijuana seized by police in That Phanom district on Tuesday night.