New additions in its Out-of-Cycle Review of Notorious Markets issued on Dec 13 are: Chatuchak, MBK Shopping Centre, Siam Square, Klong Thom, Sukhumvit Road and Patpong Market in Bangkok, Karon Beach and Patong in Phuket,  ITCity in Pattaya, and the Rong Kluea and Friendship markets at the Aranyaprathet border crossing with Cambodia. 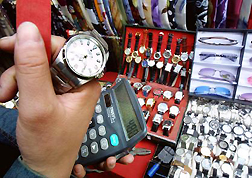 The USTR said in its report that the list identifies particular markets in which pirated or counterfeit goods are available. The US urges the responsible authorities to intensify efforts to investigate reports of piracy and counterfeiting in these and similar markets.

The 2012 notorious markets report, which also includes the internet markets, is the third list published by the USTR. The earlier lists were published in February and December  2011.

These markets have been selected for inclusion both because they exemplify wider concerns about global trademark counterfeiting and/or copyright piracy, and because their scale and popularity can cause economic harm to the US and other intellectual property rights holders, the report says.

However, the notorious markets list does not purport to reflect findings of legal violations, nor does it reflect the US governments analysis of the general climate of intellectual property right protection and enforcement of in the countries concerned, the report says.

A broader analysis of IPR protection and enforcement is presented in the annual Special 301 Report, published at the end of April each year.

Deputy Commerce Minister Nattawut Saikuar, who looks after Intellectual Property Department, said he did not why the USTR suddenly put these new zones on the list as the Thai authorities have already identified these markets under Thailand's  own "red zone" listing and already issued warnings and enforced the law continuously.

He said Thailand would integrate work between private and public sector to fight counterfeiting. A National Intellectual Property Protection Operation Centre will be created and 2013 will be announced as the year of intellectual property protection.

He said the camera recording bill had already passed the consideration of the Office of the Prosecution and is likely to be considered by the cabinet on Jan 8, 2013. If approved, it would be put to the parliament later.

The legislation aims at preventing the use of cameras to record movies in theatres for copying by counterfeiters.

Mr Nattawut said the government will try to discuss with the US a review Thailand's status. The country is now on the US Priority Watch List,  with a revision due to be announced in April.

Only this week, 30,000 items of falsely branded cosmetics worth an estimated 30 million baht had been seized in Pathum Thani province by the Department of Special Investigation.