TCT: Tourism up by double digits in 2013
Business

TCT: Tourism up by double digits in 2013 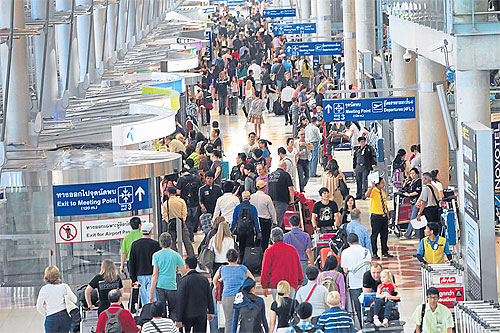 The council expects the number of international tourist arrivals will grow to 23.6 million for tourism revenue of 1.04 trillion baht next year.

The TCT said tourism has outperformed the target this year, particularly for the number of international tourist arrivals boosted mainly by a flood of Chinese visitors thanks to an island row between China and Japan.

The number of arrivals from China is expected to top 2.5 million by year-end, up by 50%.

Total international tourist arrivals have been forecast at between 21.7 and 21.8 million this year, outstripping the target of 19 million.

Total tourism revenue next year is expected to reach 1.5 trillion baht, 500 billion of which will come from domestic tourism.

This year, tourism revenue is estimated at 900 billion baht.

But TCT president Piyaman Tejapaibul said the industry is confident that tourism still has plenty of room to grow, depending on the government's tourism promotion and development plans.

Tourism-related revenue can help the country during critical moments, especially during the period of declining exports, she said.

Ms Piyaman said the government needs to finish its 2013 plan to upgrade 29 tourism destinations, as they are currently very congested.

The announcement of the Tourism Department plan to promote 29 tourist destinations by next year's third quarter has created hope among operators, but the plan has not been implemented seriously.

The 29 tourism sites selected for the first phase were out of 100 screened by the Tourism Authority of Thailand, with estimated costs of 1 billion baht, under the supervision of the Tourism Department.

These include Koh Phi Phi in Krabi, Patong beach in Phuket, Koh Samet in Rayong, Jomtien beach in Pattaya, Koh Tao and Koh Samui in Surat Thani and the Yaowarat area in Bangkok.

As well, government support must be sincere such allowing taxpayers to deduct their local tourism spending by 15,000 baht.

The government has replaced the lump-sum payment for government officials' business trips at 1,200 baht per trip with a system based on actual bills. With the new system, trip spending will reach the operators, Ms Piyaman said.

She said the success of the first-time car buyer scheme will prompt Thais to travel more by car next year.