The Stock Exchange of Thailand on Friday finished a banner year as the fifth best performing share market in the world. 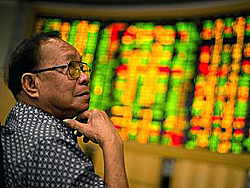 Turnover on Friday was 34.62 billion baht, with 17.6 billion shares traded. The market will be closed on Monday.

Daily average trading turnover on the SET this year has been close to 31 billion baht, compared with 28.8 billion in 2011. The market's capitalisation now exceeds 11 trillion baht, up from 8.4 trillion a year earlier.

Stock Exchange of Thailand statistics for 2012 show a total of 266.76 billion baht in capital mobilised through the stock market, the highest in 10 years.

A total of 154 public companies raised funds, including 119 mobilising 237.35 billion via the Stock Exchange of Thailand and 35 raising 10.81 billion baht via the Market for Alternative Investment. Five property funds mobilised 14.61 billion baht through the SET.

PTT Exploration and Production (PTTEP) raised the highest amount of funds on the SET at 92.3 billion baht, followed by Krung Thai Bank (KTB) at 35.2 billion.

Twenty-four companies made Initial Public Offerings (IPO) through the SET in 2012, raising a total of 113 billion baht in 2012, the highest in 10 years.

Securities companies were expected to have a better performance in 2012 as average daily trading value was 30.76 billion baht through Dec 6, compared with 28.54 billion baht for all of last year.

Brokers had feared that their margins would narrow as the industry underwent full liberlisation in terms of commission fee and business licences at the start of 2012.

Most Asian stock markets rose on Friday, hours before President Barack Obama and key lawmakers were to meet at the White House to try to reach an 11th-hour budget compromise to avert the so-called fiscal cliff. Wall Street also appeared set for a session of gains.

Most Asian markets will be closed on Monday. Hong Kong, Australia, New Zealand and Singapore will have half-day sessions.

In the currency market, the baht advanced the most in more than a week as foreign investors continued to buy Thai stocks and bonds.

Markets have been responding to the healthy economic outlook, with gross domestic product forecast to rise 5.7% this year, exceeding a previous forecast of 5.5%, the Finance Ministry said this week.

"In terms of growth, the [Thai] economy is on track," said Julia Goh, an economist at CIMB Investment Bank in Kuala Lumpur. "I'm quite confident about next year’s growth as domestic demand has strengthened, offsetting the risk from lingering external headwinds."

A finger bone of late national artist Thawan Duchanee, which was stolen seven years ago, has been returned to his son after a superstitious artist claimed that hanging the stolen relic by his easel boosted his painting talent.