The Labour Ministry will propose five measures to ease the impact of the new 300 baht daily minimum wage on small- and medium-sized businesses to the cabinet meeting next Tuesday, Labour Minister Padermchai Sasomsap said on Friday. 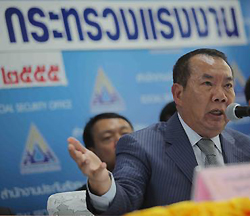 Mr Padermchai said the first proposal was to reduce official fees collected from small- and medium-sized hotels by 50% for three years. The fee currently stands at 80 baht per occupied room.

The second involves organising workshops to develop the skills of workers in educational institutions and companies.

The other proposals include increasing the payment for organising government-sponsored seminars, so that private firms involved would get more revenue, organising events to sell consumer products at cheap prices, and tax reductions for SMEs, down from 3% to 2%.

On the abrupt closure of an underwear factory in Saraburi province on Wednesday, which led to a protest by workers, the minister said the company had suffered from low sales since 2010 because of the economic crisis in Europe and the United States.

"In the name of Thai labourers' pride, they should receive proper wages as a morale booster and a New Year's gift.

"Business operators won't be affected much because they will likely benefit from strong purchasing power because of this policy," Mr Padermsak said.

Bangkok Bank executive chairman and prominent economist Kosit Panpiemras said the wage hike was a big issue for some factories because some have to lift wages from around 200 baht to 300 baht per day, about 50% extra.

"The only solution for SMEs is that they have to change their production processes, such as using machines to reduce the number of workers, apply R&D (research and development) to improve their operation, or relocate their factories to neighbouring countries," Mr Kosit said.

He said banks would be willing to help SMEs that are ready improve their operations because their survival rate would be low if they refused to change in the face of the government's determination to press forward with this policy. 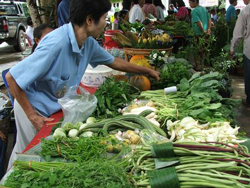 Meanwhile, In Si Sa Ket province the price of vegetables has soared since the New Year.

Bang-on Banchuen, owner of a food shop in Sirichoke real estate in Si Sa Ket, said her daily budget for buying vegetables and other food ingredients had doubled since the daily wage was raised.

However, the cause of the price increase was not clear. There are not many local vegetable crops in the Northeast due to the lack of rain at the moment and most vegetables have to be brought in from elsewhere, often over long distances.

IT sector retailers say they are not really affected by the new wage rate, with many of them already paying their employees more than 300 baht a day.

Yongyuth Chaichana, managing director of IT trading centre at Thaippatana Arcade Ltd, said the wage hike pushed up costs for his firm by 5%, which is not much.

Mr Yongyuth said all industries would be affected by the rise in labour costs, but the effect was minimal for IT businesses.

He expected IT market would continue to expand this year on the back of the government's stimulus measures.

His firm would look for way to increase profits to set off the increased labour cost, probably by marketing IT products that yield a higher profit.

He expected the IT market to grow by around 10% this year, but competition would be more intense. He predicted small IT retailers would not survive and that the market would in the near future be dominated by a few giant retailers. 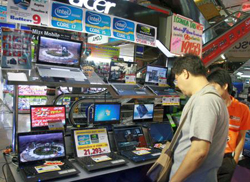 Ekachai Sirijirapattana, managing director of IT City Plc, said his firm had no problem with the wage rise because most of its employees have bachelor degrees and are already being paid more than 300 baht per day.

Mr Ekachai expected the IT market would further expand as new products gradually enter the market in 2013.

Nath Nathnitikaratch, managing director of the System Ltd, said the wage hike had no impact on his firm as most employees were already getting more than 300 baht a day.

As a result of the increase, many people would have more money to spend  which would in turn help boost IT sales, he said.

Adisak Sukhumwittaya, executive chairman of Jay Mart Plc, said his company would not be affected  as his employees were already paid more than 300 baht a day.

Nakhon Chanthila, manager for market development at Zeer Rangsit Shopping Centre, said his company already pays 10% above the new minimum of 300 baht a day, so there is no problem.

Mr Nakhon projected the IT market would continue to expand this year on the back of new products, particularly the introduction of Windows 8.

Deputy Prime Minister and Finance Minister Kittiratt Na-Ranong predicted on Thursday that the government's blanket enforcement of the 300-baht daily minimum wage will bolster businesses rather than cripple them.

Labour Minister Padermchai Sasomsap said only five major business operators have closed since the wage hike went into effect in the pilot provinces, causing about 1,700 workers to lose their jobs.

On Wednesday, more than 200 workers at an underwear factory in Saraburi held a protest against the company's abrupt closure of the factory. The workers said the company is just trying to avoid paying the new wage rate.