Miyamoto International, a global earthquake and structural engineering firm, expects revenue from Asia to grow by 30% per year from this year onwards, says Kit Miyamoto, the president and chief executive. 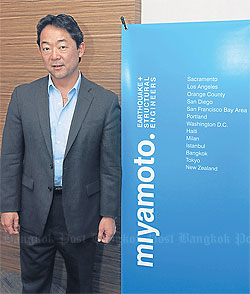 "We see tremendous growth potential in Asia, as these [earthquake] risks are near and developers are growing rapidly," said Mr Miyamoto, adding that the company's prime focus for business expansion is Southeast Asia.

Miyamoto currently has two offices in Asia _ one in Tokyo and the other in Bangkok. It will open an office in Manila next month and another in Myanmar later this year.

"We are talking to many developers [in Thailand] right now, and we are going to work with commercial buildings, both new and existing ones like bank headquarters and schools. Hospitals are also very dangerous buildings," said Mr Miyamoto.

Buildings that are prone to earthquake risks include concrete buildings, especially 3-to-5-storey structures built before the middle of the last decade.

"If the cost [of applying earthquake-resistance measures] exceeds 40% of the replacement cost, what we do is replace the building, but strengthening is usually 5-10% of the building cost," he said.

Meanwhile, schools in Bangkok are being urged to apply earthquake-resistance measures.

Mr Miyamoto said school buildings are prone to earthquakes worldwide, as they do not have many structural elements. "For instance, they have large classrooms, lots of windows, and many are made of concrete without any earthquake resistance," he said.

Schools in Bangkok are also built on very soft soil, he added.

Funded by the World Bank, Miyamoto International is strengthening the structures of 1,500 schools in Istanbul and assessing the risks of 750 schools in Manila.

Pran Siamwalla, president of the Association of the Natural Disaster Prevention Industry, said Bangkok is particularly vulnerable to earthquakes, which can occur anytime.

He said buildings constructed before 2007 were not made in accordance with earthquake prevention measures, while schools located in areas with high-rise buildings face risks if those buildings collapse.

Mr Pran said his association has proposed the Bangkok Metropolitan Administration hire specialists to conduct a risk-mapping assessment of Bangkok in order to evaluate risks including floods and storms.