Frenzied competition and unsustainable price wars delight consumers but thin the ranks of operators, with Thaicom unit Mfone among the casualties.

Mobile phone subscribers in Cambodia have had little to complain about in recent years. With six new operators entering the market since 2006, the result was oversaturation and an all-out price war as eight operators fought for a foothold in a country with fewer than 15 million people. 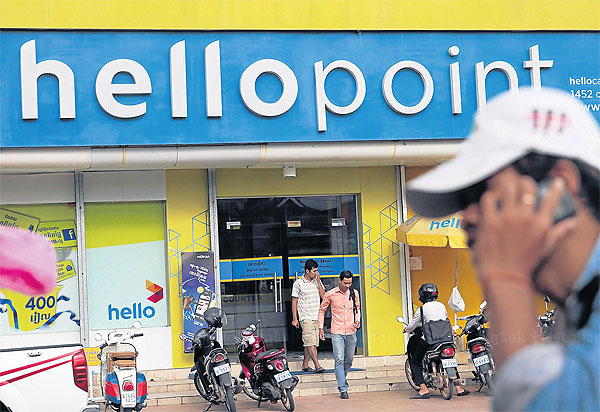 Hello, backed by deep-pocketed Axiata of Malaysia, has acquired a smaller rival and will become Cambodia’s second-largest operator.

With services improving, regular promotions dropped the price of a domestic call to as little as $0.01 per minute, far below that of Thailand, at $0.05 to $0.06 per minute and Hong Kong at around $0.15.

“Most of the telecom companies in Cambodia were backed by large, wealthy companies. The aim [at that point] became for operators to build up their subscriber bases and a pricing war was started,” said Atip Rittaporn, the former chief executive of the now-insolvent Thaicom Plc subsidiary Mfone.

But that model was not sustainable for operators, who have to pay a revenue tax of 7-10% to the government as well as absorb high operating costs as revenues continued to dwindle.

“To run a telecom company in Cambodia costs more in operating costs compared with other places due to the lack of electricity since you have to use a solar power generator,” said Mr Atip, adding that operators then had to pay for extensive marketing campaigns, distribution, call centres, customer service, financing and more.

Mr Atip founded Mfone in 1992 when it was called Cambodia Shinawatra Co Ltd, one of the first ventures abroad by Thaksin Shinawatra’s budding telecoms empire before he turned his attention to politics.

With little revenue to be made from phone usage, and only a few people using data plans in an infant smartphone culture, Cambodia’s mobile sector sustained annual loses running into the millions of dollars. Only now are the hard realities of the unsustainable, protracted price war starting to play out as the number of operators has shrunk from eight to six in the past month alone. 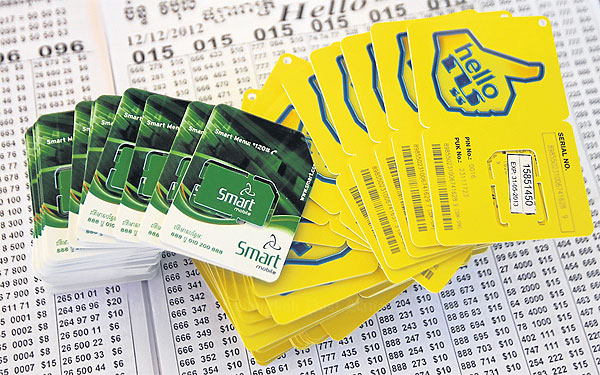 Many Cambodian consumers have three or four SIM cards to take advantage of deals, but the industry's cut-throat price wars are likely to subside soon.

Malaysia’s largest telecom company, Axiata Group Bhd, operating in Cambodia under the Hello banner, announced on Dec 13 that it had agreed in principle to acquire the local operator Latelz Co Ltd in a deal worth $155 million.

Lawsuit-plagued Mfone declared only a few weeks later that it was insolvent, having to liquidate all its subscribers to former competitor MobiTel.

“I think that this had to happen. The market can now begin to move at a level with more sustainable competition finally and in the long term we won’t see any more of these crazy price wars,” said Marc Einstein, an independent telecom analyst.

“I think that in a market the size of Cambodia, in terms of population and GDP, you can only have three, maybe four operators for the sector to be sustainable.”

He said that while consumers had benefited from the low prices, the price war scared away investors who would no longer foot the bills for upgrading one of the most outdated telecoms infrastructures in the region.

“I would say that because of the initial rush of entrants, the equipment was improved substantially, but now quality is definitely toward the bottom compared to Thailand or Vietnam,” he said.

Simon Perkins, chief executive of Hello Axiata, said Hello’s acquisition of Latelz, which operated as Smart in Cambodia, would allow his company to double its network coverage as well as give it enough total subscribers to become the second largest operator behind CamGSM’s MobiTel.

“People will have the confidence to begin investing again in the market,” he said, adding that operators may move toward upgrading their infrastructure to support 4G services.

“We found that businesses were waiting on making purchase decisions until there is some movement, such as a merger,” he said.

A reduced number of competitors, he said, would result in long-overdue price increases by the remaining operators, though the amount of the increases is not clear.

Other than that, experts expect market behaviour to move slowly until there is further consolidation among operators.

“The problem is that, even at six players, there is still going to be a price war at a high level of competition,” said Dimitry Bushik, chief commercial officer at the mobile operator Excell.

That moment may come sooner rather than later as Netherlands-based Vimpelcom, which owns the mobile operator Beeline, is widely believed to be exiting the market after taking a $527-million impairment charge for its Cambodia and Vietnam operations last year and shutting down its Vietnam operations only a few weeks later.

Aside from oversaturation, Cambodia’s telecoms sector faces other challenges. Operators claim that the market is far too under-regulated despite having two governing bodies in the Ministry of Posts and Telecommunications and the Cambodia Telecom Regulator, which was established last year.

“On the regulation side, too few rules were put in place with the thinking that this competition would provide the best way to make the most affordable rates for Cambodians. At the same time, the rules for this competition are not very fair,” Mr Bushik said.

Indeed, mobile operators have skipped out on paying hundreds of thousands of dollars owed to one another in interconnection fees. Such was the case in July when Hello, Smart and Vietnamese-owned Viettel (Cambodia) Pte filed several complaints to the government claiming that CamGSM, which operates under the MobiTel brand, owed them collectively more than $1.5 million.

Where most of those debts have since been paid, it did not happen until the situation became public knowledge. A similar situation also occurred in October when Smart and Hello claimed Mfone owed them $142,297, threatening to take the troubled company to court. According to Mr Perkins, those funds were never retrieved.

“There are always legal suits flying around and disputes between the operators. I must get 10 letters a day from disgruntled operators in this market,” Mr Perkins said, adding that fewer competitors would help cool off the frenzy in the industry.

“I think the next thing now is going to be the allocation of 4G licences,” he said. “People here are gaining access to the internet through their phones and there is going to be a demand for 4G type services.”