The government committee on tourism problems has approved in principle a proposal to lower the minimum education level needed to become a tour guide to Grade 9.

The current minimum requirement is a bachelor's degree.

Anuparb Gaysornsuwan, acting director-general of the Department of Tourism, said on Monday that the requirement needed to be lowered because of the shortage of guides for foreign tourists. 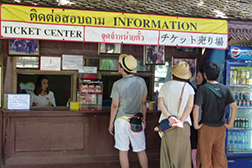 "This move will help support tourism growth and there will be more people with expertise in communicating in foreign languages in preparation for the launch of the Asean Economic Community (AEC) in late 2015," Mr Anuparb said.

He said people eligible to apply for a tour guide licence under the new critieria must work for a tour agency or as a tour guide's assistant. This would prevent tourists being exploited.

The government had allocated a budget of 10 million baht to train new tour guides, especially in languages such as Chinese, Korean, Russian, Japanese and Spanish. They will also learn languages spoken by people in Indonesia, Myanmar, Vietnam and other countries in the AEC, he said.

"There are inconsistencies in the information provided by tour agencies and the Professional Tourist Guides  Association of Thailand, because the tour agencies tell us that there's a shortage of tour guides but the association tells us differently.

"The Department of Tourism will have to quickly and simultaneously raise the quality and quantity of tour guides in Thailand," Mr Anuparb said.