Aaron Grieser and Brian Bartusch are trying to make Bangkok a more flavourful city, one craft beer at a time. 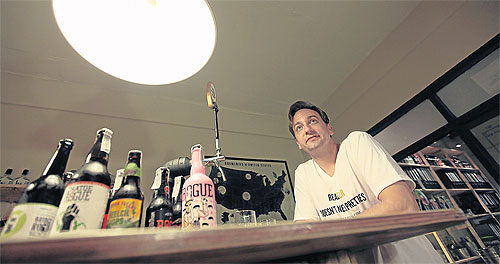 Craft beer, says Mr Grieser, a native of the US state of Oregon and Beervana's founder, is "the next big thing" in the capital.

Hugely popular in the US and now taking off in places like Japan, Australia, New Zealand and Canada, craft beer is made "independent of big corporate beer companies", he says.

At Beervana's headquarters in Bang Na, Mr Bartusch, an expat from Chicago and the fledgling beer-importing company's general manager, places a heavy glass on the bar in the office's showroom.

He pops open a bottle of "Dead Guy Ale", imported from Oregon's Rogue brewing company, and fills the glass. The bottle's label shows a skeleton on a red background gripping a beer mug atop a beer barrel. It's Beervana's best-selling beer and his personal favourite, Mr Bartusch says, as the ale climbs to the rim.

He raises the glass under his nose and breathes in before taking a short pull. "Super smooth," he says. "It's easy to drink but full of complexity and flavour. It pairs well with everything."

For a beer to be designated "craft", it requires three things, Mr Bartusch says. Craft beer must come from a small-scale brewery that produces fewer than 6 million barrels a year, the brewery must be independently owned, and the beer must be made with natural ingredients.

Craft beers are typically unpasteurised, unfiltered and have a shelf life of less than a year due to the absence of preservatives, Mr Grieser explains. The beers must be refrigerated from brewery to glass.

Most of the imported beers are made with barley as their main ingredient, instead of using "rice, corn and sugar, all these other adjuncts", Mr Grieser says.

"We're trying to preserve a fresh-from-the-brewery taste," he says. "The beer's yeast is still alive."

The pair of self-described "beer freaks" met only a year ago in Bangkok while having a beer at a food festival. They had both separately been contemplating importing craft beer.

"I quickly realised that Brian could be competition," says Mr Grieser, who left a job as a project finance lawyer to pursue the partnership.

They opened up their warehouse and office in June last year and shipped their first case of beer in September. They set a target of 30 clients and reached it almost immediately.

There are 26 bars and restaurants in Bangkok selling Beervana's beers, plus other clients in Chiang Rai and Phuket. Recent inquiries have rolled in from Hua Hin and Pattaya.

"Most of our drinkers are expats," Mr Grieser says. "Our next push is toward the Thai customers."

The better-travelled Thais who have tasted high-quality beers around the world seem to be taking to Beervana's brews, and many of the partner restaurants have a mostly Thai clientele, Mr Bartusch says: "These beers work really well paired with Thai food."

"The wine explosion in Thailand is perfect for craft beer," Mr Grieser says, explaining that many craft beer drinkers in Bangkok are also wine enthusiasts who enjoy matching Beervana's "complex" beers to high-quality food _ and can afford the price point. Beervana's beers sell for around 220 baht a bottle.

Getting started was a challenge, and it took Mr Grieser six months to figure out all the paperwork to import beer.

"We have to have a licence every time we move a bottle of beer outside of this warehouse," he says.

Keeping the beer fresh was even tougher. The beer must be kept cold every step of the way, from brewery to Beervana, to bar, to table.

"We do just-in-time delivery," Mr Grieser says. In order to prevent the beer from sitting around in the heat, Beervana stores the client's beer, then delivers it one or two boxes at a time.

Beer is everywhere in Bangkok, but most of it is the "same standard blond lagers". Craft beer is more flavourful, innovative and "constantly changing with every season", he says.

Beervana has no immediate plans to brew its own craft beer in Bangkok, due to what the entrepreneurs say are strict brewing laws and heavy taxation on small-scale breweries in Thailand.

For now, the pair are content to remain "curators of craft beers", travelling the world to find "stellar" natural brews to bring to Bangkok, aimed at making it a tastier place.