Chulalongkorn University has unveiled an ambitious plan to spend 4.6 billion baht to develop a dormitory, park, new road and a creative centre. 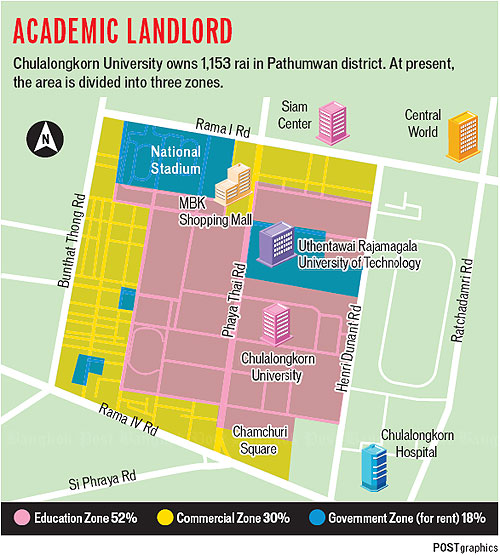 Prof Pirom Kamolratanakul, the university's president, said more than 2 billion baht will be spent on a dormitory for international students on a 16-rai plot on Banthat Thong Road.

Another huge investment of about 2 billion baht will be used to build a creative community-based innovation centre on a 21-rai site where Rajamangala Institute of Technology's Uthenthawai campus is located.

The centre will include a museum and a food technology faculty. It will focus on creative research and development, human resources and information.

The centre will aim each year to develop at least 50 small and medium-sized enterprises, more than 75 patents and new products and 50 businesses related to the creative economy.

"The development of the centre will take a few years to complete but we will wait for a relocation of Uthenthawai to a new site," Prof Pirom told a press conference yesterday.

On March 4, Uthenthawai's management met the Education Ministry to ask for a budget to relocate its campus to a 36-rai plot in Bang Ping of Muang district of Samut Prakan owned by the Treasury Department.

Without the budget and the new location, Uthenthawai is unlikely to give its current site back to the university. 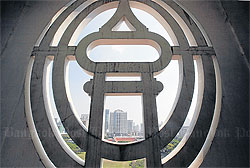 Prof Pirom said the university will meet Uthenthawai's executives to find a solution before a planned protest by Uthenthawai students on Friday.

According to the lease contract between the university and Uthenthawai, the lease period started in 1935 and ended in 2003. The university has been asking for the return of the land since 1975.

In 2004, Uthenthawai signed an agreement to relocate and to give the plot back to the university within 2005, with an allowance of not more than one year.

The university also plans to spend 600 million baht to develop a 100-year park and expand Chulalongkorn Soi 5 by 30 metres.

In the next few months, the university will ask for the cabinet's approval for its investment.

It will also ask for an approval for two mixed-use projects for which it is seeking private investment on a plot where Sam Yan market was situated and on a plot on Charoen Phol Road near the National Stadium.

The university's plots in Pathumwan district total 1,153 rai, with educational areas accounting for 52%, commercial areas 30% and areas for government use 18%. The new plan will call for the proportion of educational areas to rise to about 54%.

Most of them will be allowed to stay on except Uthenthawai and Pathumwan Primary School.

Property management is said to earn the university more than 1 billion baht a year, but an industry source estimated it should earn several billions of baht from its property assets.