The baht's surge to a 19-month high this week has prompted renewed pleas by the finance minister for the Bank of Thailand to rethink its monetary policy. 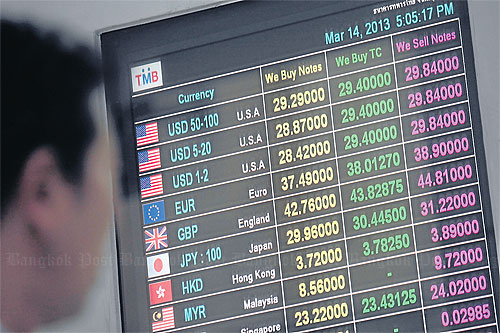 A man pauses to watch the exchange rate board in front of TMB Bank in Bangkok yesterday. PATIPAT JANTHONG

The currency touched 29.55 to the US dollar on Wednesday, its strongest level since August 2011, and has gained 3.2% year-to-date, the most among Asian currencies.

Deputy Prime Minister and Finance Minister Kittiratt Na-Ranong said he began expressing his concern about the appreciation when the baht stood at 31 to the greenback, the level the government wants the currency to remain at, but still it continues to strengthen.

However, he said he does not mean the government wants the baht to weaken to 31 to the dollar, but it does want to see the currency remain stable.

Mr Kittiratt repeated it is a matter of monetary policy management.

"We don't want to see the baht weaken unusually, and we don't demand that any authority keep the policy interest rate artificially low. But present monetary policy may be leading to the stronger baht and an abnormally high policy rate," he said.

The central bank's Feb 20 meeting of the Monetary Policy Committee (MPC) left the policy rate unchanged at 2.75% for the third time in a row despite strong pressure for a rate cut to discourage capital inflows, a major factor blamed for the baht appreciation.

The MPC's next policy rate decision is slated for April 3.

A dealer at a local bank said the baht is maintaining its long-term upward momentum on the back of persistent fund inflows.

Prasarn Trairatvorakul, the Bank of Thailand's governor, on Wednesday reaffirmed the central bank will not adjust its policy and insisted the baht's strength is of no concern.

But he did admit the strengthening baht will hurt the country's exports and economic growth.

Exports are a main engine driving the country's economic expansion in addition to government spending, private investment and domestic consumption.

A stable and proper baht would be a boon for Thai exports, said Mr Prasarn.

Mr Kittiratt said as a part of attempts to slow the baht's rise, the cabinet recently approved a Finance Ministry proposal to pay off the state's foreign debt early.

But the amount involved is minimal next to the massive recent fund inflows.

The government's foreign debt totals 75 billion baht or only 1.5% of the total public debt of 5 trillion.

Separately, Mr Kittiratt said his ministry will speak directly with the ING Group, TMB Bank's major shareholder with more than a 30% stake, about its plans to divest that stake.

The Finance Ministry itself owns 26% of the medium-sized bank.