MANILA - The Philippines on Saturday opens the first casino in the hub that is its answer to Macau, and billionaire Enrique Razon will have the gamblers to himself for now. 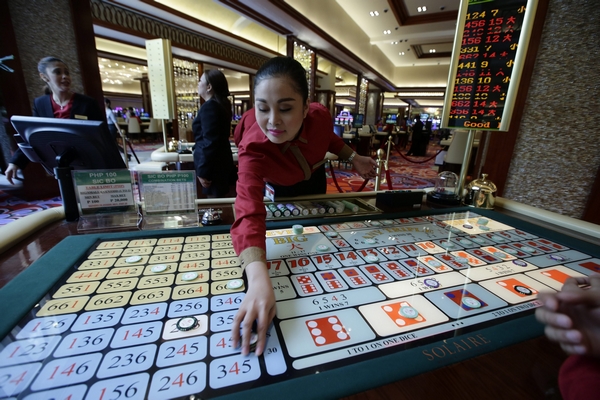 A dealer collects chips during a game simulation inside the Solaire Resort and Casino in Manila on Thursday. (EPA Photo)

The port magnate's $1.2-billion Solaire Manila casino will have a monopoly in the capital city's new entertainment and gambling complex until the country’s richest man, Henry Sy, opens a venture there in 2014.

The billionaires are investing in casinos as the country seeks to emulate the success of Macau, where gamblers from China's mainland fueled a 14% revenue surge to a record $38 billion last year.

"Razon’s venture is closely watched because it can prove if the Philippines can get a bigger share of junket and VIP market in Asia," said Allan Yu, who helps manage about $11 billion at Metropolitan Bank & Trust Co.

"It’s very promising and it looks like it’s going to take off."

The gaming area in Solaire is decorated with mother-of-pearl-covered columns and a floor embedded with colored glass. It is designed to get 45% of its revenue from VIPs, or high-stakes bettors, according to Razon partner Bradley Stone, president at Global Gaming Asset Management.

Razon, who controls 80% of Bloomberry, holds one of four casino licences the Philippines awarded in 2008 and 2009 for the 110-hectare entertainment hub that is close to Manila Bay.

Sy and Melco Crown Entertainment Ltd are scheduled to jointly open a casino resort there in July 2014.

A venture of Japanese billionaire Kazuo Okada and a fourth casino in the Manila complex by Philippine billionaire Andrew Tan and Genting Hong Kong Ltd are expected to open between 2015 and 2016.

Razon faces existing competition outside the new hub, including from a gaming complex Genting and Tan opened in 2009 in front of a terminal at the capital’s international airport.

The Philippine Amusement and Gaming Corp, the state regulator and casino operator, also has four casinos in the capital.

Solaire's casino operations will be run by Global Gaming, whose principals aside from Stone include William Weidner, former president at Las Vegas Sands Corp, and Garry Saunders, former chief operating officer at Melco Crown. Global Gaming has a 9 percent stake in Bloomberry Resorts.

Razon has so far spent $750 million to build Solaire's first phase that opens this weekend and he's spending another $400 million for an expansion that will be completed by the third quarter of 2014, Stone said.

The Philippine gambling market can offer a 30% return on investments, he said.
Manila is three to four hours away from China, Japan and South Korea and will be an attractive alternative for high rollers in these markets, Stone said.

The Philippines is counting on the new casino ventures to boost tourist traffic that lags regional neighbours including Indonesia and Thailand. It's also betting these investments, set by government at $1 billion for each licence holder, will help cut the jobless rate, which is among the highest in Asia.

"This will really be the first time that the Philippines is going after the premium player and Mr Razon understands this," Stone said. "Manila has the opportunity to be competitive and to get its share of that business."