The human side of a megaproject
Business

The human side of a megaproject

Local residents’ lives are being changed dramatically as Dawei complex takes shape, but ITD aims to create change for the better while helping traditional livelihoods to continue

The sleepy region of Dawei is being awakened as a giant seaport and industrial estate complex take shape — and local people’s lives and livelihoods are being altered forever. 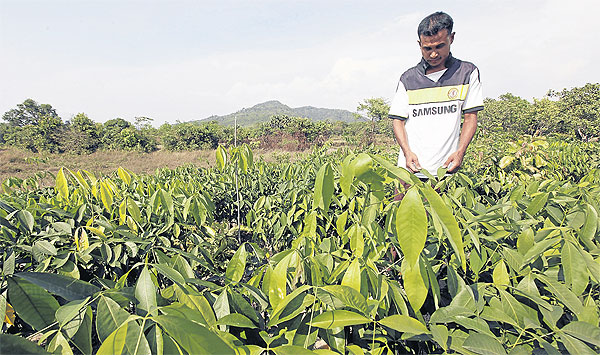 Aung Soe, a Mudu villager, takes care of rubber saplings at his farm, where he now earns 4 million kyat (about 135,000 baht) per year.

Large-scale industrial projects rarely produce happy endings for the communities where development takes place. But Italian-Thai Development Plc is determined to minimise the impact on Dawei and its people, and even to improve their chances for pursuing their traditional livelihoods.

Located along the beautiful and tranquil coast in southeastern Myanmar, Dawei district covers 13,750 square kilometres and is home to more than 150,000 people, many of them subsistence fishermen and farmers.

The Dawei project site itself covers about 250 square kilometres including the coastal area of Dawei beach, a forest and an old oil palm plantation. The development will require 15 villages with 4,173 households to be relocated to new sites, affecting about 10,000 people.

Dawei also boasts Maungmagan beach, considered second only to the famous Ngapali beach in Myanmar, but the long coastal strip has never been promoted as a tourism destination. As a result, most of the local residents grow crops for their living. Surpluses are small as commercial trade is not a priority. Any surplus will be sold to other villagers, particularly the fishermen.

Rice, watermelon and cashew nuts are common food crops, while rubber and agar wood are also grown. Dawei is famous for its cashews, which cost about half as much as one would pay in Bangkok.

Along the coast, fishermen routinely row their small boats out to sea, catch fish and sell to their neighbours. The fresh catch is abundant and cannot all be sold, so a lot of fish is dried for sale as well.

But as Dawei changes, people in the capital of Thanintharyi Division, particularly those who have to move out, are concerned about whether they can maintain their existing occupations.

Nophadol Briksavand, senior adviser for environmental affairs at Dawei with Italian-Thai Development (ITD), says the company’s goal is to ensure that not only will people be able to continue their livelihoods, but also to thrive while doing so.

He said ITD was helping in two ways. First, it is training villagers in integrated cultivation for commercial purposes. Second, it is recruiting villagers as workers on the Dawei site.

Mr Nophadol acknowledged that few local residents had the skills required for construction work. Meanwhile, the government lacks the funds to train people for the influx of industrial activity after economic liberalisation. But because ITD and new industries in Dawei will need these skills, the company has started its own training programmes.

ITD’s corporate social responsibility unit (CSR) in Dawei has set up demonstration farms to train villagers in modern integrated agricultural methods. The programme includes livestock breeding, with pigs to be delivered to the villagers in the near future. 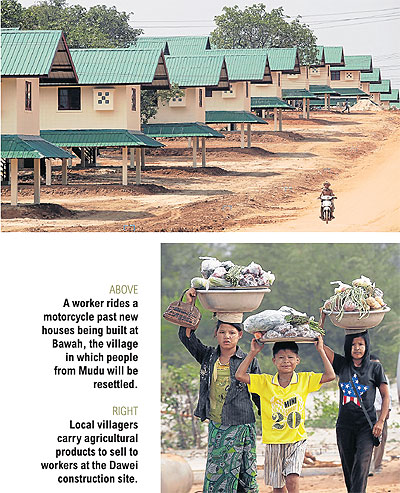 The agricultural and skilled labour training programmes are taking place along with the plan to relocate villagers to a new site called Bawah. Once the villagers move to new homes, they can start growing new crops, while some will be workers at the Dawei site.

Min Kyaw Wai, senior agriculturist for the Dawei project, said high-yield seeds such as watermelon, durian, rambutan and rubber had been brought from Thailand to grow in Dawei. Some villagers, who used to migrate to Thailand for work, are enjoying good production and have decided to stay at home.

He said ITD also had built a pipeline to carry water from the highlands to the villagers’ plantations so that they can grow crops year-round.

Aung Soe, a 40-year-old farmer from Mudu village who spent 15 years living in Thailand as a labourer, said he was now growing rubber, watermelons and cashew nuts on his own land. For rubber, he grows saplings for sale, which give him a very good income.

“I earn 4 million kyat per year from agriculture from my 40 rai of land. So, I decided to stay here in my home country. Now I’m looking for a new area for my plantation after I move to Bawah,” he said.

Terapong Techasatian, manager for CSR programme, said that after ITD trained villagers to do integrated farming, the next step would be to encourage them to sell their produce at the central market, which ITD is constructing.

“The demand for agricultural products will increase sharply once a lot of construction in Dawei is under way,” said Mr Terapong. “Many people such as construction workers and those who work in the manufacturing plants will move in. So the villagers need to know how to do integrated farming and how to sell their products in the market. They will no longer be growing crops for their consumption alone. The money in their pockets will increase.

Apart from agricultural training, Mr Terapong said that ITD was recruiting Mudu villagers to work at the construction site. The contractor needs between 500 and 700 workers, both male and female. The villagers will be paid between 3,500 and 5,000 kyat (120 to 170 baht) per day, including overtime.

Along with the training and recruitment, Panno Kraiwanit, project manager for infrastructure development, said that ITD had prepared three new residential zones — Bawah with 1,849 houses, Pagaw Zoon with 2,272, and Pan Din In with 52 houses.

At Bawah, the first village to be constructed, there will be a new school, monastery, clinic and hospital in the first phase. After villagers move in, ITD will gradually construct other facilities including a town hall, police station, park and playground and commercial area.

ITD managing director Premchai Karnasuta said the company had already paid nearly 100 million baht in compensation for villagers living in Mudu, the first village to be relocated. In the second half of March, 343 households of Mudu village will start migrating to Bawah. The new homes as well as necessary facilities including electricity and utilities are all ready.

Mr Premchai said the company had set aside another 300 million baht for compensation and land acquisition for new homes for other villagers.

Mr Terapong acknowledged that most local residents originally did not want to move out of the homes and villages where they had lived for generations. They were opposed to the construction project and worried about its impact on their lives and the environment.

But he said the CSR unit gradually made contact with villagers and built good relationships with them.

“We’re on the same side as the villagers. We have to do everything to let them know that we’re their friends,” he said. “The construction will happen for certain because it is the Myanmar government’s policy, but how will we be their friends and communicate what they want from the government and the project development?”

U Mg Tan, the chief of Mudu village, said many residents now foresaw advantages from the Dawei project as they would have more job opportunities in addition to agriculture.

“We finally decided to move out in order to pave the way for the Dawei project construction,” he said. “What we need in return from the Myanmar government is to guarantee that the villagers will have land for agriculture and have an opportunity to be workers in the Dawei project so that we can be sure that we can earn our living.”