Is this a case of deja VU all over again?
Business

Is this a case of deja VU all over again?

Not according to the property experts, who insist the present situation does not mirror the one that helped to cause the 1997 financial crisis, although they think a little caution would not be bad

When the 1997 financial crisis broke, fingers were first pointed at the property sector, with its massive speculation and huge loan defaults, as a root cause of the financial meltdown. 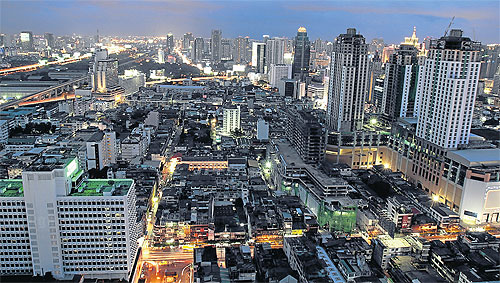 Central Bangkok is the site of many recent property projects, but experts deny there are signs of a property bubble. PATIPAT JANTHONG

In recent years, property prices have again risen sharply, and new projects can be seen virtually everywhere, prompting fresh concerns about whether bad history is going to be repeated. Virabongsa Ramangkura, chairman of the Bank of Thailand, has warned the market that the current foreign capital inflows have put the economy at risk of a bubble in both the financial and the property sectors that could burst by year-end.

However, amid the skyrocketing property prices in the past three years, economists still believe no bubble is forming _ at least, not yet _ and that authorities and bankers are better prepared after the unforgettable lessons of 1997.

Charl Kengchon, managing director of the Kasikorn Research Center (KResearch), said there is no sign of a bubble in the overall property market, but signs have been found in some locations experiencing an oversupply.

However, some property developers have mitigated their risk by diversifying to upcountry.

Completely built residential units available in and around Bangkok numbered 88,378 last year, far lower than the 124,462 units at the time of the 1997 financial crisis.

"The solid financial position of property developers overall is another key factor that has eased concerns about a property bubble," said Mr Charl.

The current low debt-to-GDP ratio of property developers results from broader fund mobilisation alternatives and better risk management on the part of both them and financial institutions in a conscious bid to avoid another 1997.

Piyasak Manason, vice-president for economic and industrial research at Kiatnakin Bank, agreed with KResearch, saying, "There is definitely no bubble" despite the large supply of condominium units launched in the past 12 months

"Condos represent a change in people's behaviour, and the number of new launches is still lower than that of low-rises before 1997," he said.

Samma Kitsin, director-general of the Real Estate Information Center, said oversupply does not necessarily mean a bubble, which entails a rapid and dramatic increase in property prices.

"It's true that a large number of condo units have been launched, but prices have not jumped dramatically, so there's no bubble," he said. "A bubble can be detected ahead of time, but they're still unpredictable."

Mr Samma pointed out that when Hong Kong experienced its property bubble, with prices spiking 30% in only one year, it did not burst, as the government was able to control it.

Asst Prof Manop Bongsadadt of Chulalongkorn University's architecture and planning faculty cautioned that even though signs of a bubble have yet to appear, prevention is better than cure and suggested the Bank of Thailand impose stricter measures to cool the market.

"Bubbles are normal amid an economic uptrend. A good economy should have a slight bubble, but it needs to be controlled and not allowed to burst," he said.

China effectively controlled its own overheating property sector by introducing progressive interest rates for home loans for second or subsequent home purchases. For example, if the interest rate for a first-time homebuyer was 7%, then it might have been 8% for a second unit purchased by the same buyer and 9% for a third one.

"Some Chinese property buyers avoided the higher interest rates by using their family members as nominee buyers, but the measure was better than doing nothing," said Asst Prof Manop.

He suggests the central bank change the limit of the loan-to-value rate for condos to 80-85% from the present 90%.

One-day sell-outs of condo projects indicate fake demand, said Asst Prof Manop. Real demand may be up to 30%, the speculators and investors buying to rent out the units accounting for the rest. Problems will arise when a project is complete and unit transfer starts, as some buyers may then refuse to accept transfer since they are speculators and not real buyers.

"Developers know this but don't care, as they think they can take the down payment and get the booking back for resell. Some developers want to see strong presales just so their share price will rise," he said.

Asst Prof Manop said developers should ask for a higher down payment, up to 30%, in order to weed out speculators.

Markets at the tip of your fingers