Passing green durians on as ripe has the potential to dethrone the king of fruit.

Young durians are now being sold as ripe ones by reckless vendors and the practice could hurt the reputation of the fruit, one of Thailand's finest delicacies. 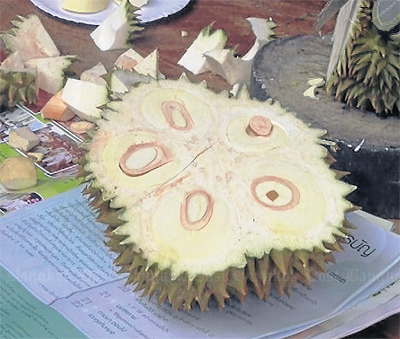 Young durians, with starch content at 25-30%, are not sweet. JAKKRIT WAEKARYHONG

Some traders have lured growers to cut the fruit before harvesting time by offering cash upfront, albeit in smaller amounts than they normally get for ripe ones.

``Growers who are in need of cash have taken the offer without realising the devastating effects,'' the source said.

``Many traders would bargain with growers to buy an entire crop at a low cost. Once the deal is reached, they don't want to waste any time. They harvest raw durians and export them to fetch higher prices early in the season, when the prices are high,'' he said.

Normally, it takes 120-135 days from flowering for Mon Thong and Kan Yao varieties to ripen, and 100-110 days for Chani. Growers will cut the fruit after these periods and leave it for another 4-7 days to ripen further and be ready to eat.

Aware of the issue, authorities in durian-growing provinces _ Chanthaburi, Trat and Rayong _ are trying to curb the practice.

Tawatchai Katephan, Trat's Khao Saming district chief, said he has joined agricultural officials in sending teams to inspect exporters' warehouses and test durian meat. The goal is to ensure the standard quality of the fruit.

The test method involves putting a small amount of the meat in a microwave oven for 2-3 minutes and then measuring starch content in what is left.

``Ripe fruit should have no less than 32% of starch in the meat. The tests found over 40% of starch in many durians, which is good,'' said Mr Tawatchai.

In Rayong, agricultural officer Songtham Chamnan said a recent test at a farm in the area found low starch content at 25-30%. The official then put a cross mark on the fruit, indicating it cannot be exported.

Rayong governor Tawatchai Therdpaothai has warned traders and growers found guilty of deceiving the public could face a three-year jail term, or a fine of up to 6,000 baht fine, or both.

The practice violates the law as well as consumer-protection regulations.

He said that selling substandard durians could hurt Rayong, one of the biggest plantations of durians.

Thailand is a major durian-growing country, producing 510,000 tonnes last year, 350,000 of which were exported as fresh fruit for about 5.8 billion baht.

The remaining volume is sold locally.

China and Hong Kong are big markets for durians where people prefer whole fruit while buyers in the US, Australia, Russia, and the Netherlands prefer frozen durians.

The Agricultural Economics Office estimates production this year will increase to about 547,000 tonnes.

However, the volume remains far behind of those before the massive floods in 2011 when large durian plantations were destroyed.