Koda Ltd Executive Director Ernie Koh has a message for clients in 50 countries who complain about the Singapore-based furniture maker's first price increase in two years: Take it or leave it.

Koda's factories in China, Malaysia and Vietnam are battling rising costs as governments in Asia increase minimum wages to curb discontent over a widening wealth gap. While weak global growth and increased competition limited the ability of producers to raise prices during the past five years, Koh says they cannot go on absorbing the additional expenses.

"We aren't even passing on the full costs," said Koh, who counts United States retailer Williams-Sonoma Inc (WSM), owner of Pottery Barn, and Cost Plus Inc among customers. "Wage escalation in China these past few years has been crazy. We have collective bargaining with the union in Vietnam, and in Malaysia there is a big outcry among manufacturers over the minimum wage."

Average pay in Asia almost doubled between 2000 and 2011, compared with a 5% increase in developed countries and about 23% worldwide, according to the International Labour Organisation in Geneva. The gain was led by China, where average remuneration more than tripled during the period. Southeast Asia is catching up, with new minimum pay levels in at least five nations eroding companies' ability to make cheap toys, clothes and furniture.

"Producers are no longer able to absorb rising wage costs and ultimately will have to jack up prices for consumers in the West," said Frederic Neumann, co-head of Asian economics research at HSBC Holdings Plc in Hong Kong and a former consultant on Asian economics and politics to the World Bank. "It's the manufacturing hub of the world, and if prices rise here, then inevitably the global price level will have to rise as well."

The threat of inflation prompted Pacific Investment Management Co, which runs the world's biggest bond fund, to plan Asia's first fund to protect against it. The investment will aim to return at least two percentage points more than the average consumer-price gains in Singapore and Hong Kong, Michael Thompson, head of Pimco's wealth-management group for the region excluding Japan, said in a March 7 interview in Singapore.

Singapore's inflation quickened to 4.9% in February compared with an average 2.6% in the past decade, while in Hong Kong, consumer prices rose 4.4%, more than double the 1.9% 10-year average.

In a survey of 1,546 Chinese exporters by Global Sources Ltd published in November, companies cited rising or high production and labour costs as the biggest challenge they face.

Koda's Koh and other producers looking to pass on the increases to customers are being helped by indications of a global recovery that’s boosting shares and reviving investment from the US to Japan. The MSCI World (MXWO) Index of global stocks has risen 24% in the past 10 months.

US orders for non-military capital goods excluding aircraft, a proxy for companies' future business spending on equipment and software, rose 9.8% in the three months through January, the most for a three-month period since 1993.

"There are brighter signs in the world economy, Asia's demand has been strengthening, and we are seeing a pick-up in industrial activity," said Tomo Kinoshita, an economist at Nomura Holdings Inc in Tokyo. "That means Asian companies can start to gradually increase margins again."

In Jakarta, the capital of Indonesia and home to 10 million people, Governor Joko Widodo last year approved a 44% increase in minimum pay for workers, to 2.2 million rupiah ($226) a month. The national government is considering extending the plan across the country, which has the world's fourth-largest population, after China, India and the US.

Thailand raised its national daily minimum wage to 300 baht ($10) in January. Malaysia introduced a base salary last year, benefitting about 3.2 million workers before elections that must be held within three months. A similar tactic helped Taiwanese President Ma Ying-jeou, who won a second term in 2012 after increasing the lower limit on earnings by 5 percent.

Asia's manufacturing success -- the region makes all of Apple Inc's iPhones and supplies about 38% of US imports -- also is boosting the region's currencies, making exports even more expensive. 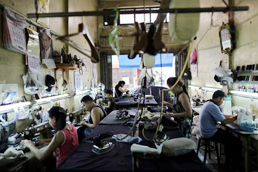 Tailors make clothes at a workshop in Bangkok. (Bloomberg Photo)

The Thai baht, Philippine peso, Indonesian rupiah and Malaysian ringgit all have gained more than 16% against the US dollar in the past four years. China's yuan is up 10%.

"When you add to the appreciation trend in the yuan, it means that China's export prices will probably continue to rise," said Dominic Bryant, senior Asia economist for BNP Paribas in Hong Kong.

Some economists suggest that globalisation of trade has caused a "globalisation of inflation," said Raphael A Auer, deputy head of international trade and capital flows at the Swiss central bank, and Philip Saure, the institution's senior economist. Increasing trade integration has caused a significant jump in the rate of price spillovers, they said in a February report for the Bank for International Settlements.

In a study of the yuan's revaluation against the dollar from 2005 to 2008, Auer estimates each 1% appreciation of the Chinese currency raised US producer prices by 0.55%.

Asia -- which had seven of the top 10 exporters of textiles and clothing and office and telecommunications equipment in 2011 -- shipped $5.98 trillion of goods that year, an 18% increase from the year before, according to the World Trade Organisation (WTO). Southeast Asia alone sent out $1.24 trillion of products, compared with $432 billion in 2000 and $72 billion in 1980, data from the WTO show.

Thailand, the world's second-largest producer of computer disk drives, demonstrated in October 2011 how deeply the region is integrated in the world’s supply chains when it suffered its worst floods in 70 years. As facilities were inundated, production was affected worldwide for companies including Apple Inc and Toyota Motor Corp. Global disk-drive prices jumped an average 20% in the aftermath of the disaster.

Salaries in most countries still have a long way to go to approach those in the U.S. and Europe. The average Philippine factory worker earned about $1.49 an hour in 2011, compared with $21.98 in the United Kingdom and $23.70 in the US, according to the US Labour Department.

"Even after doubling over the past decade, wages in Asia are still way lower," said Malte Luebker, senior regional wage specialist for Asia at the ILO's office in Bangkok.

The US and Europe also have yet to feel a major effect from Asia’s inflationary trend, and policy makers remain focused on nurturing a recovery.

The Federal Reserve's preferred price gauge -- which is tied to consumer spending -- is below the US central bank's 2% target, and its most recent projection has inflation at or below that mark through 2015. The European Central Bank predicts annual consumer-price gains will average 1.6% this year and 1.3% in 2014.

Even so, while pay levels in many Asian nations will take years to match those in the developed world, they already are pushing up the costs for some goods.

Malaysia's Top Glove Corp (TOPG), the world's largest supplier of rubber and latex gloves, raised prices three times between September and February amid higher costs of raw materials and to offset an estimated 50% jump in its domestic labor bill, Chairman Lim Wee Chai said in an e-mail from Kuala Lumpur.

Earnings for the company, which has production facilities in Malaysia, Thailand and China, were reduced by eight million ringgit ($2.6 million) in the first two months of the year because of Malaysia's minimum-wage policy, Lim said.

"Our bottom line was impacted," and "our customers understand the need for a revision," he said.

Some businesses are looking for ways to reduce overhead by replacing people with robots or moving to countries with cheaper labor, such as Bangladesh or Vietnam.

"You go and automate," said Richard Eu, chief executive officer of Singapore-based Eu Yan Sang International Ltd (EYSAN), the largest seller of traditional Chinese medicine in Asia outside of China. "We used to have rows of little old ladies wrapping. That's all they were doing. Now we’ve got machines to do all that."

US shoemakers increasingly are moving production out of China to countries such as Vietnam and Indonesia, as raw material and labour costs rise, Matt Priest, president of the Footwear Distributors & Retailers of America said in a March 19 interview in Shanghai.

Hong Kong-based clothing and consumer-goods supplier Li & Fung, whose customers include Wal-Mart Stores Inc (WMT) and Reebok International Ltd (RBK), sourced 24% more from factories in Vietnam in the first half of 2012 compared with a year earlier, the company said in a September presentation.

While relocating production may tap pools of cheaper labour, it also undermines the low-cost manufacturing model that made southern China the world’s workshop for two decades: millions of cheap workers, a restrained currency, concentrated supply networks and consolidated transportation.

"There's unlikely to be another China out there, and without another China, the direction of global prices is fairly clear," said Robert Prior-Wandesforde, head of Southeast Asia Economics at Credit Suisse Group AG in Singapore.

That is certainly true for Carl Johnson, one of Koh's customers for Koda products. The vice president of product development at Orange County, California-based Star International Furniture Inc, said all 15 of its Asian suppliers for furniture including bedroom and dining sets have raised prices, and his company has passed on a 5% increase to customers in the past 18 months.

"The wage increases I hear about in Asia are astronomical, and our American customers just laugh because they cannot relate to it," Johnson said. "This is not over yet."