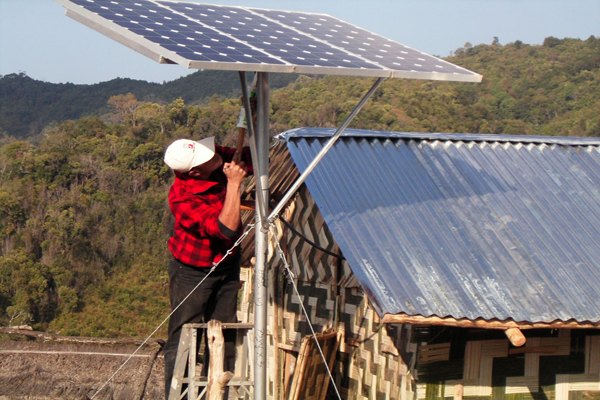 As of July 2011, 20,000 households in Laos have power from solar home systems. (Bangkok Post file photo)

Mr Piyasvasti, chairman of the Energy for Environment Foundation, said the average cost of solar energy at 5.12 to 5.99 baht per megawatt-hour (unit) will make it competitive with liquefied natural gas (LNG), which costs 5.71 baht per unit.

In the longer term, LNG prices will rise in line with global oil prices.

"Demand for electricity at midday and in the afternoon should be served by electricity generated by solar panels," said Mr Piyasvasti.

Mr Piyasvasti said the Energy Ministry should do more to promote solar farms.

It should also start offering incentives for solar roofs to be installed at homes and workplaces, as well as factories.

The ministry has decided not to grant new solar farm licences, citing that high costs of solar farms may cause consumers to shoulder higher electricity prices.

Since the government kicked off solar farm promotion in 2007, 155 solar projects have been operated with a combined generating capacity of 379 megawatts.

Meanwhile, incentives for solar roofs at homes and workplaces have been suspended.

According to Citi Research, the average price of solar modules in the global market has dropped significantly from US$74.48 per watt in 1972 to $0.97 by the end of last year.

The Industrial Works Department, Energy Regulatory Commission and the Ministry of Natural Resources and Environment are all involved in licence applications.

The investment can break even within 10 years as the cost has halved from 15 years ago, he said.