Russians spread their wings to South

Khao Lak, Krabi and Koh Samui are expected to become popular destinations for Russian travellers thanks to beautiful beaches and convenient transport. 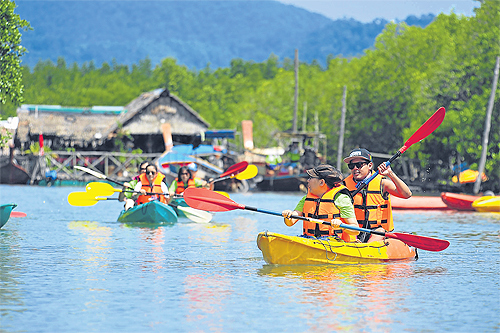 C9 Hotelworks, a Phuket-based hospitality consulting firm serving the Asia-Pacific region, has spotted a trend of Russian tourists switching to new destinations after previously spending most of their time in Pattaya and Phuket.

Samui has also reported strong interest from Russians during the high season that started in October. Many used charter flights to fly to Surat Thani before travelling to the island by bus and boat.

"We don't have the actual figure for Russian tourists in Krabi, but after talking to hotels and tourism operators over there, we are confident that there will be a big number of Russians visiting the southern province from October."

He said there will be more direct charter flights to Krabi after its airport is upgraded to meet international standards. Moreover, Phuket airport has reached its capacity.

C9 Hotelworks said the average daily spending of Russian travellers is US$135 (3,920 baht) per day, the highest among European visitors. Average spending per trip by Russian visitors is $1,986. The typical Russian has 28 paid vacation days at work and 12 public holidays a year.

During the winter in extremely cold locations, businesses are shut down for long periods, increasing demand for sunshine holidays.

The number of Eastern European visitors to Thailand was 1.6 million last year.

This reflected a five-year compound annual growth rate of 30%, starting from 2007. Two factors for skyrocketing growth were the visa exemption for Russians since 2007 and Eastern Europe's sustainable economic expansion.

Mr Barnett said there are no doubts Phuket's tourism economy is now highly leveraged by the mounting influence of Eastern European visitors at a time when its traditional markets continue to retract.

This has triggered stress fractures in local infrastructure and created an ongoing controversy over the blending of cultures of the new East and the old West, he said.