Gold prices tipped to continue down

The post-Songkran traffic jams were on the pavements outside gold shops on Wednesday, as buyers jammed every shop in town to buy the precious metal, which dropped 2,400 baht per baht-weight overnight. 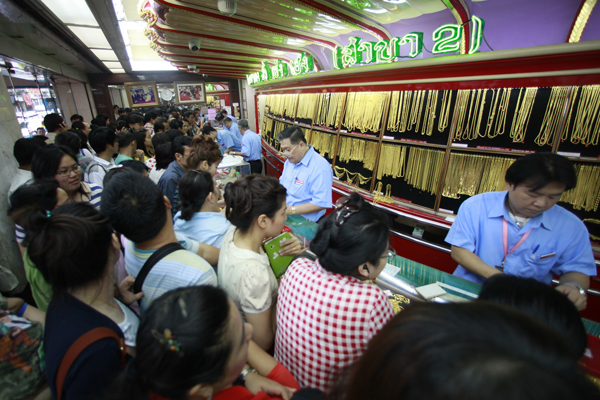 The Gold Trade Association adjusted the price eight times Wednesday, finally closing business at 18,950 baht for sales per baht-weight of gold bar, meaning a buying price of 18,850 baht. On Friday, as shops closed for the Songkran holiday, prices were 21,350 and 21,250 baht.

Shops were jammed, particularly the large gold shops in Yaowarat. Managers asked customers to line up and take queue numbers. Similar scenes took place in Phuket, Phitsanulok, Nakhon Ratchasima and other  provinces. Gold shops in some provinces reportedly closed up rather than face the jam. A Chanthaburi resident told the Bangkok Post her gold shop in the gem-dealing town was closed for the day.

The Thailand Futures Exchange (TFEX) expanded its ceiling and floor prices for gold futures to 20%, up from 10%, it was announced in a statement issued Wednesday morning.

The TFEX took that step after it was forced to suspend all metals trades for 30 minutes, from 9.45-10.15am, as  settlement prices surged downward by more than the 10% trigger.

Kamonthan Pornpaisarnvijit, director of Gold Research Centre said the drop in gold prices was expected, but it will have a psychological effect as buyers may lose confidence in gold as a safe investment choice.

He said the gold market was signaling a bear run as indicated by continuous sales by large funds. From the beginning of this year, over 200 tonnes of gold have been dumped into the market, including the release of gold reserves by Cyprus.

The centre views that the price drop is not only a matter of fundamentals, but also because of technical impact that was causing panic sales. In time, both these factors will fade and gold will recover. For now, however, gold prices are on a downward trend, he said.

According to YLG Bullion International Co Ltd, the gold price has hit a low point of $1,321 an ounce, 21% lower than the beginning of the year. After hitting the $1,500 resistance point, the continuing price drop indicates a downward trend. The company now calculates the next resistance barrier at $1,300 or 17,700 baht per baht-weight of gold bar. Therefore, it suggests buyers should delay investing to see whether the gold price would be able to stand above $1,300.

While the gold price dropped in line with global price, the baht rose toward a 16-year high after the International Monetary Fund raised its economic growth forecast for Japan, Thailand's biggest source of foreign investment and second-largest export market.

The currency gained 0.2 per cent from April 12 to 28.96 per dollar on Wednesday morning, according to data compiled by Bloomberg, after markets were closed on Monday and Tuesday for Songkran. The currency touched 28.88 on April 10, the highest level since the 1997 devaluation.