Finance Minister Kittiratt Na-Ranong said on Friday that Bank of Thailand (BoT) governor Prasarn Trairatvorakul should be replaced because he had ignored his calls to cut the key policy rate to curb the Thai currency's appreciation against the dollar. 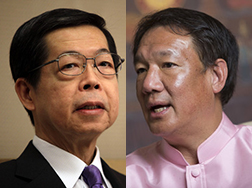 Speaking during a discussion on "Thailand's Future Economy" with former finance minister Korn Chatikavanij, a debate hosted by Suthichai Yoon, Mr Kittiratt said it was the first time that he had disclosed his thoughts on this matter.

The deputy prime minister for economic affairs said his thoughts derived from the failure of the central bank chief to cut the repurchase rate to curb the baht’s appreciation, even after a series of discussions on the issue between the Ministry of Finance and the central bank.

Such ignorance forced him to send a letter to the BoT chief reminding him of the need for a policy rate cut, because if the economy was damaged someone must be held responsible for it, he added.

Mr Kittiratt said the repurchase rate should be lowered by one percentage point as the current rate of  2.75% is too high and has led to the problems of a huge foreign direct investment inflow and the strengthening baht.

"We have different economic opinions, we need to understand each other,"  Mr Kittiratt said. "I have many thoughts and in the end they are just thoughts."

He added, "When we have a difference of opinion, I need to try to convince him to think like me.
Harmony in managing the economy is important. We don't have a problem in our relationship. We just have different views."

Mr Korn, deputy leader of the opposition Democrat Party, said Mr Kittiratt should not have spoken out about wanting to replace the BoT governor, as it could erode the confidence of investors. 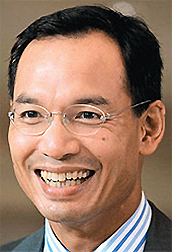 The former finance minister said he feels the current key policy rate is at a suitable level.

"Many other countries in the region have higher policy rates than Thailand and a cut in the key policy rate is not the solution to the baht's appreciation," Mr Korn said.

Thanawat Polwichai, head of the Economic and Business Forecast Centre at the University of the Thai Chamber of Commerce, said it is not easy to dismiss a central bank governor. There are regulations.

According to the Bank of Thailand Act, a BoT governor can be replaced if the incumbent dies, resigns, does not meet the qualifications, or violates certain sections of the law, he said.

Under Thai law, a central bank governor can only be removed by the cabinet on the recommendation of the finance minister or the Bank of Thailand’s board as a result of misconduct or gross incompetence.

"The law is designed to protect the BoT from political intervention, which is applied around the world," Mr Thanawat said.

Under Thai law, the Bank of Thailand is an independent body in charge of monetary policy. As finance minister, Mr Kittiratt is in charge of fiscal policy - government fund raising and expenditure.

Mr Prasarn was unavailable for comment on Mr Kittiratt’s remarks when called at his office in Bangkok on Friday. He was appointed to a five-year term as governor in 2010.

The FTI chief said he will call a meeting of members of five industry groups to discuss needed assistance from the government to minimise the impact of the strengthening baht next Wednesday, April 24.

On Friday, April 26, representatives of the FTI will go to the Ministry of Commerce for talks on how best to maintain the country’s export markets, said Mr Payungsak.

The ministry's export growth target of 9% for 2013 would be difficult to achieve if the baht's movement is not in line with those of neighbouring countries' currencies, he said.

Mr Olarn said apart from intervention in the money market, the central bank's monetary policy committee should cut the key policy rate to prevent the baht from getting too strong.