Likely to buy 60% stake in business

CP All Plc, the local operator of 7-Eleven convenience stores, is to acquire a major stake in Siam Makro Plc, the operator of Makro cash-and-carry stores in Thailand, said a source close to the deal. 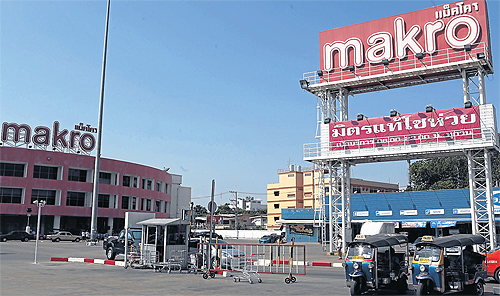 Acquisition details between representatives of Charoen Pokphand (CP) Group, which has Siam Commercial Bank as its financial adviser, and Siam Makro were drawn up during the Songkran holiday in Hong Kong.

CP All will probably buy a stake of more than 60% in Siam Makro.

According to Siam Makro's website, its parent company SHV Holdings held a 64.3% stake through a Thai unit and an affiliate as of March 31, 2012.

A retail expert said CP Group, owned by billionaire Dhanin Chearavanont, is interested in the cash-and-carry business because of attractive factors such as low competition and good cash flow.

Siam Makro was incorporated in 1988 between SHV Holdings from the Netherlands and CP Group, which had a 51% stake.

"CP never planned to end its cash-and-carry business. What happened was an accident," the source said.

He explained that CP Group wanted to buy back a stake in Siam Makro because it wanted to expand in all retail segments and taking over successful Siam Makro is easier than creating its own brand.

Siam Makro has 57 outlets nationwide, with 46 branches upcountry and 11 in Greater Bangkok. Its revenue last year was 114 billion baht, up 15.4%, while net profit stood at 3.55 billion baht. Its market capitalisation was 163.7 billion baht.

Another source said this is not the first time SHV Holdings has wanted to sell its Makro operation in Thailand.

In the past decade, Walmart has shown strong interest in Siam Makro but the parties failed to agree on price.

"The sale of Siam Makro will pull the curtain down for Makro cash-and-carry under SHV Holdings in Asia," the second source said.

CP Group has various businesses overseas, so it sees great potential in branching out the cash-and-carry format in Thailand and the Asean region.

While hypermarkets have expanded to almost every province, 20-25 provinces are waiting for cash-and-carry stores. The format is attractive for retailers operators because it generates good cash flow.

Siam Makro requested suspension of its share trade yesterday, sitting at 682 baht, while CP All shares fell 5.6% to close at 43.50 baht.