China's affluent cities of Guangzhou and Shenzhen will raise their minimum wages by 19% in the manufacturing heartland of Guangdong province on Wednesday, to coincide with international Labour Day.

Similar hikes in the minimum wage have been seen this year in Southeast Asia, one of China's main rivals in labour-intensive industries such as garments, shoes, toys and processed foods. 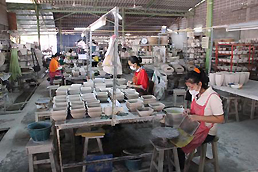 Workers work at a ceramic factory in Lampang province. (Photo by Aswin Wongnorkaew)

In the Indonesian capital Jakarta, the minimum wage rose 40% to 226 dollars.

The wage spikes top a decade of gradual pay increases for workers in the region.

According to the International Labour Organisation (ILO), average monthly average wages adjusted for inflation nearly doubled in Asia during the previous decade.

The ILO calculated that a Filipino factory worker takes home 1.40 dollars an hour, compared to the 23.30 dollars earned by workers in the United States.

"This is certainly not the end of cheap labour, but it might be the end of ridiculously cheap labour," said Malte Luebker, senior regional wage specialist at the ILO's Bangkok office.

China accounts for the lion's share of Asian wage increases. It has been deliberately following a policy to bolster incomes and domestic consumption, while shifting investments from the coastal provinces to the Chinese hinterland.

Foxconn Technology, the main manufacturer of Apple gadgets, was criticised by the Western press in 2010 for alleged labour abuses at its Shenzhen factories. It is now attempting to lower production costs through automation. It has also moved production to cheaper provinces, opening huge new plants in several inland cities in the last three years.

With wages rising even in rural provinces, other labour intensive industries have been shifting production in recent years from China to countries like Bangladesh, Cambodia, Indonesia and Vietnam.

For manufacturers in those countries, rising wages have begun to take a toll on profit margins, especially as European and US importers are driving hard bargains because of recession and high unemployment in their home markets.

"Buyers refuse to pay even a cent more," said Purnomo Narmiadi, head of the Indonesian Employers' Association in the industrial town of Bekasi, a hub for garment and shoe factories where the minimum wage was raised 40% in January.

"They say that they can always switch to contract factories in Vietnam."

But if buyers shift to Vietnam, at least this year, they should not expect great bargains.

"All importers have to accept higher prices if they still want to import from us," said Nguyen Quang Vinh, director of the Hanoi College of Garment Industry.

"Our margin is shrinking because 65% of our profit now goes to pay wages, compared with 50% five years ago," he said.

Whether labour intensive industries such as garments can shift to even cheaper countries is questionable.

"I have heard about the possibility of some companies shifting production to countries that have lower salaries like Laos or Myanmar, but Laos is a small country without enough labour while Myanmar has poor infrastructure," said Pham Thuy Lieu, director of Hanoi Msa-Hapro Co Ltd, a South Korean garment manufacturer in Hanoi.

Bangladesh, still ranked among the cheapest labour markets, is gaining a bad reputation after a series of deadly fires and other accidents at garment factories.

"Having the minimum wage at 300 baht (10 dollars) a day has helped us maintain our workforce because there is less turnover, so the efficiency of the factory improves," said Ghabyapad Tantipipatpong, spokeswoman of the Thai Food Processors' Association.

Rising productivity tends offset the costs of higher wages and helps to increase domestic consumption, which is the long-term goal of many Asian governments.

"Wages used to be looked at from the perspective of where can I make things cheapest, but now foreign investors are looking at where do the people have the purchasing power to buy what I want to sell them," said the ILO's Luebker.