Soaring silk prices lead to surge in number of farmers

A surge in silk yarn prices in the last two years has attracted more silk farmers, according to the Queen Sirikit Department of Sericulture (QSDS). 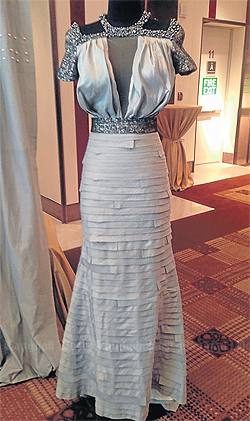 Most Thai silk is used in the domestic market but plans are afoot to increase production.

An increase in minimum wages in China, the largest silk producer, coupled with lower silk exports due to increased use in that country, has caused the global supply of silk to dwindle.

Current prices are 1,700 to 1,800 baht a kilogramme after doubling in the last two years, said QSDS deputy director-general Oratai Silapanapaporn.

China produces 100,000 tonnes of silk a year, good for 80% of the global market, while Thai silk exports account for just 0.1% of global production, with most Thai silk used locally.

With prices on the rise, Mrs Oratai said the QSDS hopes to increase the number of silk farmers by 20,000 a year.

The department, which comes under the Agriculture and Cooperatives Ministry, was set up three years ago to help support silk farmers.

The number of farmers is still down by a third from 20 years ago as a result of farmers switching to the industrial sector or growing other crops.

"But if we promote an increase in production, we have to make sure that there's a market to support it," said Mrs Oratai.

She also stressed the need to increase land for cultivation. The ministry is in talks with the Agricultural Land Reform Office for that purpose.

Thailand still faces a shortage of industrial silk, with local production making up just half of the yearly demand for 320 tonnes.

The country's overall silk production each year is 600 tonnes, of which 500 tonnes is used locally.

The upcoming Asean single market offers an opportunity for Thai silk, she said, as the regional bloc's 10 member countries use silk in many important ceremonies.

Although other countries like Vietnam also make silk, Thailand is a stronger player with a larger variety of products.

PHITSANULOK: The body of a man, who was reported missing three days previously, was found dead in the Nan river near Wat Chan Tawan-ok temple in Muang district on Monday afternoon.

KHON KAEN: Five passengers died and 12 others seriously injured after a Bangkok-bound double-decker bus they were travelling in went up in flames in Ban Haet district of this northeastern province in the small hours on Tuesday, police said.