Although almost 80% of the companies in Asean feel that they need to operate their businesses in a sustainable way, fewer than half have committed the resources to manage that strategy, according to a recent survey by PricewaterhouseCoopers (PwC). 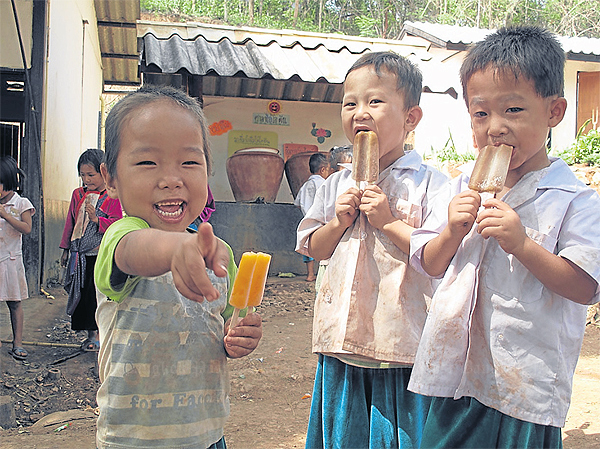 Local children enjoy Popsicles as members of the SET CSR club construct an eco-building at the Border Patrol Police school in Chiang Mai.

“While sustainability is already well established in developed economies, it is now increasingly becoming a focus of attention in Asean nations, including Thailand,” said Sira Intarakumthornchai, the CEO of PwC Thailand. “More companies are now embracing sustainability, becoming more committed to and accountable about the true benefits of their sustainability-related activities.”

In the survey that PwC undertook earlier this year, only 3% of the companies had good leadership structures in place to dive sustainability forward, while only about 20% even talked about the issue during their board meetings.

Many companies like to tell the public, through the media, about their “sustainability” initiatives, but only 18% of firms submit to independent third-party verification and assurance.

The PwC survey covered 211 companies in five major Asean economies: Indonesia, Malaysia, the Philippines, Thailand and Vietnam. They were asked about the importance attached to sustainable measures and the way they are carried out inside the company; the extent to which stakeholders are participating at the process of sustainability within the company; if sustainability issues are reported and monitored for follow-through; and exactly what are and will be the key drivers of sustainable operations.

The main results are quite compelling, but could also explain the poor showing of Southeast Asian companies in global rankings such as the annual Global 100 Ranking issued by the “clean capitalism” group Corporate Knights, or the Sustainability Champions Report researched by the Boston Consulting Group for the World Economic Forum.

In the Global 100, the only representatives from Asean are companies from Singapore. In the Sustainability Champions Report, which considers only developing countries worldwide, Manila Water Company is the region’s only representative.

The PwC report offers some insights into why countries in Asean were behind the global curve.

The lack of development on sustainability issues is reflected mainly in the gap between attitude and execution. The awareness of the importance of sustainability is great. Eighty-one percent of the 211 questioned companies said sustainability was extremely or very relevant for them, but fewer than half had an adequate strategy to deal with the issues.

When companies were asked how they created awareness of the great value sustainability can offer, the results were mixed. Only 12% made it a point to ensure that all stakeholders comprehended what was required in matters of sustainable operation. The reporting and monitoring of actions to promote sustainability was around 64%, led by Malaysian and Indonesian listed companies, for which such reporting is mandatory.

At the same time, only 20% of the companies manage sustainability in their supply chain, but the same percentage said it was a topic of regularly holding board meetings. But many companies, the survey suggests, still lack a functional strategy to enhance, monitor and report on sustainability measures and activities.

The report also contrasted levels of sustainability awareness: a low 63% in Thailand compared with 97% in the Philippines. Where comprehension of stakeholders was concerned, 61% of Philippine companies said at least half of all stakeholders were aware of what was needed, compared with only 27% of Thai businesses. In broad terms, the Philippines led the five countries surveyed and Thailand placed last in almost all categories.

In the Philippines just over half of the respondents publicly disclosed information about their climate change actions. Generally, carbon emissions, environment-friendly packaging, waste disposal, recyclability of materials and energy consumption are key sustainability and environmental concerns.

“As environmental and social consciousness increases in our society, companies have begun to put more importance on the ‘Triple Bottom Line’: People, Planet, and Profit. But, many are unsure how to begin and how their sustainability practices compare to the rest of their peers in the country and within the Asean region,” said Rossana S. Javier, managing partner and CEO of PwC Philippines.

Not only is there a notable disparity between Southeast Asia and the rest of the world, but also there is a wide gap between countries in Asean itself. To overcome both, it will take a great effort over the next few years, starting with a serious assessment of energy- and carbon-related costs that will become the main driver of sustainability for the next five years.

The fact is, a company’s ability to operate sustainability is not just something for scoring public-relations points. Companies that lack sustainability strategies and accountability risk alienating investors and losing their ability to compete in world markets.

Svasvadi Anumanrajdhon, a partner at PwC Thailand, said that in the Thai context, the response from business is often expressed in the media through pictures of executives presenting donations or employees planting trees. However, while these efforts are to be praised, many of Thailand’s leading companies are now beginning to move away from simple philanthropic activities. Instead, they are starting to integrate environmental and social considerations into the core of their business strategies.

Thailand’s recent experience with large-scale natural disasters has also increased awareness that neglect of environmental aspects of development can result in significant long-term negative effects that, as in the case of the 2011 floods, can bring an economy to a halt.

“That said, sustainability awareness is still in the initial stages in Thailand and is, accordingly, not a regular agenda item for most companies,” said Mr Svasvadi.

“Based on our survey, Thailand still falls behind other participating countries on a number of sustainability practices — for instance, in the implementation of monitoring systems, the sophistication of sustainability disclosures, and stakeholder engagement.”

The PwC report can be downloaded at http://www.pwc.com/my/en/publications/pulse-check-on-sustainability.jhtml