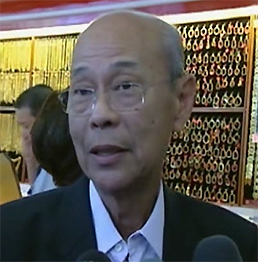 Jitti: Gold shops in Chinatown have run out of gold.

Some gold shops even confronted each other, competing to buy gold from sellers, he said.

He said investors with gold in hand should not sell at this time because prices would likely increase from now on, after the gold bar price earlier tumbled to 18,600 baht per baht-weight.

The Bank of Thailand announced that country imported 190 billion baht of gold in the first quarter of 2013, up 61% year-on-year.

In China, gold consumption soared 26% in the first three months of 2013 from a year ago amid strong bullion sales and rising jewelry demand, according to the China Gold Association.

Total consumption in China, the world's largest user after India, reached 320.54 metric tonnes in the first quarter. Purchases of gold bars surged 49% to 120.39 tonnes, while jewelry gained 16% to 178.59 tonnes, the association said.

It said gold output in China, the world's largest producer, gained 11% in the same period to 89.91 tonnes.

Meanwhile, Warren Buffett said there were better places for gold investors to put their money.

“What motivates most gold purchasers is their belief that the ranks of the fearful will grow,” Buffett, 82, wrote last year in a letter to shareholders. “During the past decade that belief has proved correct. Beyond that, the rising price has on its own generated additional buying enthusiasm, attracting purchasers who see the rise as validating an investment thesis. As ‘bandwagon’ investors join any party, they create their own truth -- for a while.”