Thailand urged to wrap up EU FTA or risk falling behind

Thailand has been warned that direct investment from the European Union (EU) might continue to fall as other Asean nations benefit from free-trade agreements (FTAs) with the bloc. 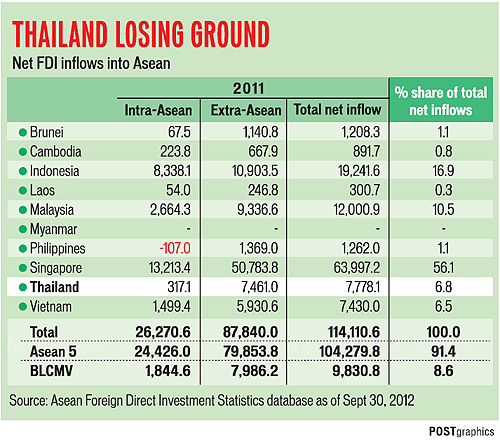 Foreign direct investment in Thailand has been shrinking while inflows into Asean, particularly Singapore, Malaysia and Indonesia, have surged, says the European-Asean Business Centre (EABC).

The EU is by far the largest investor in Asean and ranks second in Thailand after Japan.

The EU and Thailand are both each other's third-largest trading partner in Asean, said the centre.

The EU just finalised a bilateral FTA with Singapore and is negotiating with Malaysia, Thailand and Vietnam.

The first round of Thailand-EU FTA negotiations is scheduled for late this month in Brussels, Belgium, with the second round in September in Bangkok.

"Thailand faces unique opportunities and challenges to grow its economy. If Thailand does not advance this process, it risks being left at a disadvantage vis-a-vis its neighbours," said Mr Daniel.

Thailand should lock in its FTA benefits before the Asean Economic Community comes into effect in 2016, he said.

A recent study prepared by the Board of Trade indicated that EU imports of Thai goods are expected to grow by 6.7% or 950 million euros (36.36 billion baht) in the first year of the FTA and give an additional 0.56% growth to Thailand's gross domestic product.

"We are very pleased to see the Thai government moving forward with the FTA negotiations in a transparent and visionary manner," said Mr Daniel.

By removing barriers, the FTA will drive investment and facilitate technology and skill transfer to Thailand's service sector, he said.

Although the Thai economy has proved to be resilient, the service sector has been underperforming due to low labour productivity and a lack of investment, Mr Daniel added.

Jan Eriksson, EABC vice-president and president of the Thai-Swedish Chamber of Commerce, brushed aside concerns about growing alcohol consumption in Thailand if the FTA cuts the import tax.

"Less than 2% of alcohol consumed in Thailand is imported and even if the tax is cut, wines will still cost four times more than locally made products. White spirits, which are mostly consumed upcountry, have nothing to do with imports and the FTA," he said.