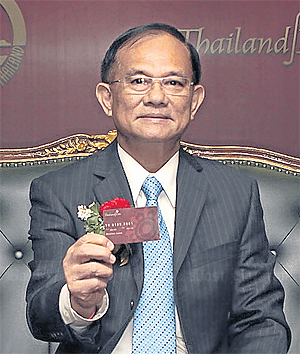 China, India and Russia are ripe for the picking, says Mr Suraphon.

Suraphon Svetasreni, governor of the Tourism Authority of Thailand and chairman of TPC, said 18 TAT offices abroad and authorised sales representatives in 12 Asian countries have been instructed to sell the card.

The Elite Card was initiated by the Thaksin Shinawatra administration in 2003 as a tool for promoting Thai tourism.

But after years of losses and failure to reach its membership target of 1 million members, the project nearly died before the cabinet last November approved a plan to revive it.

TPC currently has just 2,534 cardholders, all of them life-time members.

Mr Suraphon said TPC, operator of the card, sees big opportunities among the wealthier segments of China, India and Russia.

The governor will hold a meeting of the TAT's international offices next month to explain conditions and campaigns for the relaunched card, with executives in these offices initially acting as sales representatives.

TPC targets selling 650 cards in the remaining months of this year and a higher volume next year.

A new campaign will tap foreign travellers and investors who make frequent visits to Thailand, she said.

The company is also considering targeting investors looking to buy real estate in Thailand, so property developers could help to sell new memberships.

Members are eligible to transfer their membership rights only one time, and an annual fee of 20,000 baht is also charged.