The Coalition Against Corruption (CAC) says corruption in the country has risen sharply over the past two years to an urgent level now. 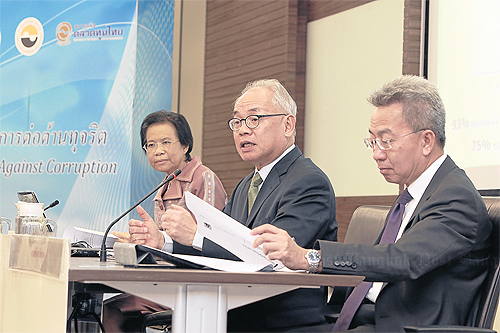 Business leaders believe Thailand's economic growth might be 50% higher if not for corruption, according to the latest survey conducted by the CAC.

The survey of 1,066 executives in Thailand was done from January to April, with about 75% of respondents saying corruption has increased rapidly and 93% putting corruption at a high or very high level.

At present, 166 companies are CAC members and have vowed not to get involved in corruption and fraud. The CAC is a joint effort of eight leading private sector groups.

"Corruption hurts the country's reputation and competitiveness," said Bandid Nijathaworn, president and chief executive of the Thai Institute of Directors.

Of respondents, 63% said corruption has a very high impact on business and 54% said it raises the cost of doing business by more than 10%, he said.

Respondents said corruption happens most during the procurement process with the government, followed by registration or applying for licences, government project auctions and private sector procurement.

The most popular format of corruption is cronyism, followed by graft, policy corruption by politicians and cash paid for future benefit.

Potential industries believed to be susceptible to corruption include telecommunications, energy and utilities, agriculture, property development and construction materials.

Mr Bandid said that while the country's corruption situation is serious, there are signs of higher awareness in the private sector.

Another good sign is that a quarter of respondents had high or very high confidence that corruption can be solved.

"Some 51% of respondents are ready to take collective action to eliminate fraud, and 46% will take part if a practical plan is available," said Mr Bandid, "much higher than in previous years."

But the survey noted that government and politicians are the keys to solving corruption.