Despite the variety of business magazines available in bookstores, Forbes Thailand is keen to offer distinctive content with material and resources sourced from Forbes Inc's extensive overseas network. 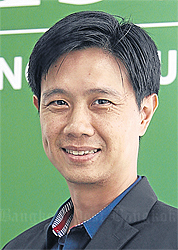 Nopporn: The Forbes network is a strength

"The Forbes network is one of the key strengths attracting readers from all walks of life," said Nopporn Wong-Anan, editor-in-chief of the new addition to Post International Media.

Akin to other Forbes editions worldwide, Forbes Thailand focuses on the hardships faced by entrepreneurs who eventually achieve success in building their business empires and make contributions to enhance social development programmes.

International content is based on articles provided by other Forbes editions in the US and Asia.

To make it stand out from Forbes in other countries, the magazine has special columns. A "power woman" column features successful female entrepreneurs, while an "entrepreneur" column highlights relatively unfamiliar business figures.

Mr Nopporn said the strength of the Forbes brand across the globe would give it an edge and had helped to bring a positive response from potential readers and the business sector to the launch of Forbes Thailand.

After working as a journalist for two decades in many fields from economics and politics to non-profit organisations, he has been delighted by such an impressive welcome from business leaders.

"For the first edition, we have used a little gimmick to ensure public awareness of our entry into the market by engaging people to predict who will be on the cover of the magazine," said Mr Nopporn.

"It is a significant marketing strategy, and the lucky winner will be awarded with a one-year subscription."

Even though the business magazine market is intensely competitive, he is confident that Forbes Thailand will set a new standard in the country.

"It will have strong content from Forbes' US and Asia editions, while Forbes' worldwide research team adds to the magazine's advantages," he said.

Regarding the coming Asean Economic Community, Mr Nopporn said that as Forbes Thailand is published in Thai, there is no plan for overseas sales. However, the magazine is ready to offer regional business content and successful entrepreneurs' perspectives.

The July editions of Forbes Asia and Forbes Thailand will simultaneously publish a list of 50 Thai billionaires and the stories behind their success, he said.