Facing limited impact from the higher minimum wage, European firms operating in Thailand say an inadequate supply of skilled labour is their top concern, with regional integration unlikely to ease the situation. 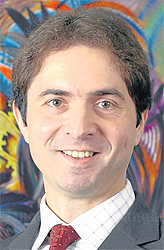 A recent survey by the European Asean Business Centre found that 67% of respondents cited availability of skilled workers as the main challenge in human resources and employment planning in Thailand.

Such constraints have been identified despite the fact that more than half are planning to increase their headcount over the next 12 months due to their optimistic views of the business outlook in Thailand over the next two years, said Arnaud Bialecki, vice-chairman of the Cross Sectoral Issues Working Group.

Meanwhile, only 26% of respondents cited higher wages as the major threat to their businesses. As daily minimum wages rose by 40% since the start of this year, companies found their costs increasing by only 10-30% as wages comprise a minimal share of total costs, he said.

"Companies have experienced most difficulties trying to fill professional and expert positions as well as retaining existing employees. Work permits have several limitations and unclear points, so foreign businessmen are not sure what they are allowed to do here," Mr Bialecki said.

Most respondents projected an increase in the level of benefits and compensation offered to employees over the next two years given the tight labour market, said Mr Bialecki, also country manager of Sodexo, the world's largest food and facility management service provider with a global workforce of 420,000.

Globally, Thailand's unemployment rate ranks third after Monaco and Qatar at 0.6%. Of the working population of 38 million, 44% work in the agricultural sector, 42% in the service sector and 14% in the manufacturing sector.

In other Southeast Asian countries, it is easier for companies to recruit foreign workers. Malaysia, for example, has workers from Indonesia, Nepal and China, while local people mainly work in management positions, Mr Bialecki said.

Although the launch of the Asean Economic Community in 2016 will allow a free flow of skilled workers including doctors and nurses, Mr Bialecki said regional integration is unlikely to ease the situation.

"There is a serious shortage of nurses but although there is a good supply of nursing professionals in neighbouring countries, especially the Philippines, the requirements for them to work in Thailand are not convenient as they have to pass a Thai literacy test," he said.

Mr Bialecki said the European chambers of commerce have worked with the Labour Ministry and the Board of Investment to address labour issues but only a slight improvement has been made.