An emergency cabinet meeting on Wednesday agreed to reduce the price paid under the rice-pledging scheme by 20 per cent, effective with the second crop beginning on July 1.

The decision cuts the rice-pledging price from 15,000 to 12,000 baht per tonne, as proposed by the National Rice Policy Committee, PM’s Office Minister Varathep Rattanakorn said.

The reduction in the pledging price will take effect from July 1. In addition to the 20% cut, the amount paid to each farming family will be capped under the new rules at 500,000 baht, he said.

Mr Varathep said the decision was based on the changing price of rice on the world market, the baht’s appreciation, and the increase in global rice supply.

The price cut is also aimed at reaching a balanced budget in 2017, he added.

But Prasit Boonchoey, chairman of the Thai Farmers Association, said his group will petition Prime Minister Yingluck Shinawatra, asking her to review the cabinet’s decision.

He said rice farmers, particularly those in the central plains, disagreed with the reduction. He said 12,000 baht per tonne for ordinary paddy is too low.

Rice costs more than 8,000 baht per tonne to produce and the 12,000 baht pledging price can be reduced to account for moisture content in the rice, he explained. Farmers could receive just 9,000 to 9,500 baht per tonne after deductions for excessive moisture, Mr Prasit said. 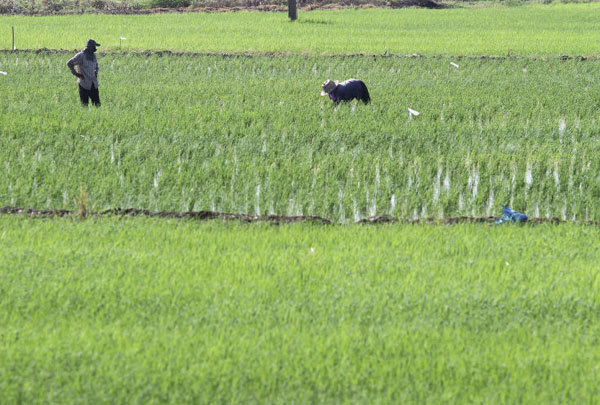 Rice farmers are complaining about the new pledging price which is 3,000 baht lower than earlier promises of 15,000 baht a tonne.

Farmers will still make a profit from the rice scheme, but a very small one, he said. It will be insufficient to cover the daily living costs of farmers' extended families, he said.

Mr Prasit said the association’s representatives in every province would gather opinions and suggestions on the rice-pledging scheme and report back.

These opnions will be summarised and passed on to Ms Yingluck, the chair of the National Rice Policy Committee, and Commerce Minister Boonsong Teriyapirom, who is responsible for the rice scheme, he said.

Chukiat Opaswong, chairman of the Thai Rice Exporters Association, welcomed the lower price, praising the government for admitting that its pledging price was too high for the market.

He predicted that the competitiveness of rice exporters would substantially improve almost immediately. Rice exports were down by as much as 35% over the past year, due to the high price of Thai rice.

The 20% cut in the price paid to farmers will enable exporters to compete with the state in buying grain for export, Mr Chukiat added, because the rice price differential between the domestic and global markets would be about the same.

Mr Chukiat said there could be an over-supply on the world rice market this year because the major producers - India, Vietnam and Thailand - were all expecting bumper crops.

Thai harvests could produce as much as 28-29 million tonnes of rice this year, he said.

Rice is the only major commodity whose price has fallen in the past year.

Meanwhile, about 20 people claiming to be farmers from Phitsanulok province, on Wednesday afternoon rallied against the Democrat Party at its headquarters in Bangkok.

They showed placards reading “Warong also eats rice, but does not help farmers”, and “Don’t drag farmers into the political game”.

The signs referred to the Democrat Party MP for Phitsanulok, Warong Dejkitwikrom, who strongly attacked the government’s rice scheme for posting huge losses.

The protesters, led by Anirut Deechanuan, also submitted a letter to Democrat leader Abhisit Vejjajiva, arguing that the losses from the rice scheme were not caused by corruption, but from paying farmers a higher price than the market.

They said the rice scheme is to help farmers and to stimulate the economy, even though the government would have to shoulder the losses, the farmers said in the letter.

The protesters called on Mr Abhisit and the Democrat MPs to refrain from making the rice scheme a political issue to discredit the Pheu Thai Party and destroy rice farmers.

They believed the government decided to reduce the pledging price for rice to 12,000 baht from 15,000 baht per tonne because of pressure from the main opposition party.

Democrat MP for Bangkok Ratchada Thanadirek and MP for Chanthaburi Yukol Chanawatpanya, who accepted the letter from the Phitsanulok delegation, told the protesters that the reduction in the pledging price for rice was not caused by the Democrat Party.

The MPs said the Democrats exposed corruption in the rice-pledging scheme in order to urge the government to resolve the problem.

The Democrat Party had no intention of obstructing the government in implementing programmes to help farmers.

In the northern province of Phayao, Sathien Wienglor, chairman of the Huay Yang Kham group of farmers, said it was unacceptable cut the pledging price. By paying 15,000 baht, the government was providing "suitable" help to farmers to support their children's education, buy vehicles to use for farming, and repay debts to both loan sharks and the Bank for Agriculture and Agricultural Cooperatives.

He predicted more than 1,000 farmers in Phayao would rally at the province's government centre on Thursday to submit a request to Ms Yingluck to reconsider the cut.

Somchai Khemphet, president of a farmers association in Chun district of Phayao, said the scheme helped farmers and stimulated the economy with spending from farmers. He said losses were the result of poor management by related agencies.

"If there is corruption, the government should investigate and solve the problem," removing those who illegally gained advantage, he said.

Samien Hongtoh, chairman of the central region's farmers' network, said he is waiting for information on new rules about moisture content. If the government sets a price of 12,000 baht and then subtracts fees for any rice above 15% moisture content, farmers will never accept the price, because they would end up getting only 8,000-9,000 baht a tonne.

Rice with more than 15% moisture content currently demands a lower price under the government's purchase programme. The higher the moisture content of the rice above 15%, the lower the price is paid to farmers.

Mr Samien said if the moisture content level were set at 25%, it would be acceptable, because farmers would wind up with more than 10,000 baht from pledging the rice.