The state-owned Islamic Bank of Thailand (IBank) believes its capital-adequacy ratio will return to positive territory this year. 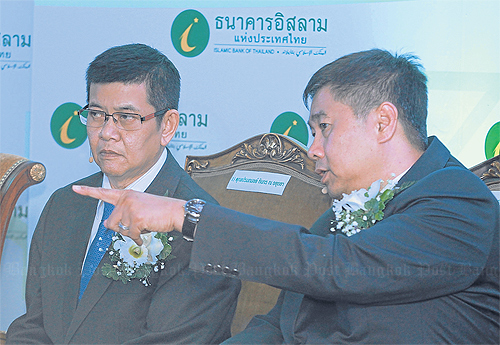 The expectation stems from applying the Finance Ministry's loan-loss provision requirements, which are less stringent than the Bank of Thailand's.

Thongrob Danampai, chairman of IBank's executive committee, said the Finance Ministry requires the bank to set aside only 9-10 billion baht in loan-loss provision reserves based on 2012 performance.

However, it reserved 15 billion baht to comply with central bank rules.

The Finance Ministry allows specialised financial institutions to choose the loan-loss provision requirements of either the Bank of Thailand or the ministry.

"IBank does not need to seek additional fresh capital from the Finance Ministry, as our loan-loss reserves exceeded its requirement last year," he said.

The ministry requires specialised financial institutions to set aside the equivalent of 1% of outstanding loans to cover overdue payments of one month, 2% for 2-3 months, 20% for 3-6 months, 50% for 6-12 months and 100% for more than 12 months.

In comparison, the Bank of Thailand requires commercial banks under its supervision to set aside the equivalent of 1% for one-month overdue payments, 2% for 2-3 months and 100% for more than three months.

IBank is one of eight specialised financial institutions under Finance Ministry supervision. Others include the Government Savings Bank, the Government Housing Bank and the Bank for Agriculture and Agricultural Cooperatives.

Mr Thongrob said IBank's non-performing loans (NPLs) amounted to 38.5 billion baht as of last Dec 31 or 34.2% of its total lending.

IBank's suspension of working-capital loans late last year could be blamed for a 15-billion-baht surge in NPLs, he said.

Of the 38.5 billion baht in NPLs, 8 billion worth have been settled completely, 7 billion worth are under debt restructuring and expected to become performing loans by November, he said.

Another 10 billion baht worth are pending legal procedures, with half expected to be settled out of court. The others are being restructured.