When Moe Zaw returned to Myanmar in mid-2011 after studying in the United States, he had little experience in real estate, even if his parents had worked in property for two decades. 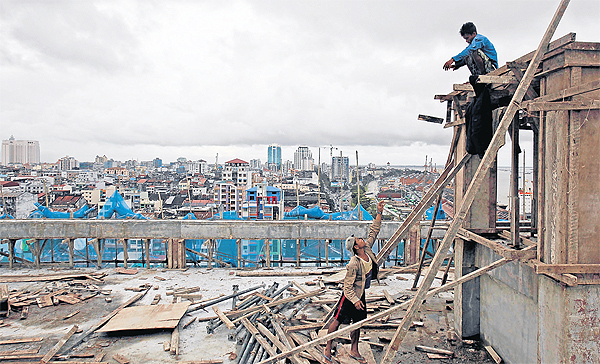 Two labourers work on the top of a construction site in Yangon.

Political and economic reforms had just started to kick in after half a century of military rule.

“Right after the government changed, I thought there might be opportunities,” said Moe Zaw.

Since then, top-end office rents in Yangon have roughly doubled to US$90 per square metre — more than in Bangkok, Singapore and even parts of New York — while finding a basic apartment typically means paying a year’s rent upfront, possibly in cash.

Moe Zaw set up the property agency Myanmar Deals Leasing and has been riding the boom.

Last week, he and his partner agency Scipio Services called for expressions of interest on behalf of their client, December Construction Company (DCC), aimed at building Myanmar’s tallest tower.

In May, DCC received a permit from authorities to develop a project up to 126.29 metres above sea level. It has started to demolish a cinema it owns near Yangon’s train station in preparation to build on the 1,000-square-metre site.

Authorities in Yangon do not allow developers to build above 127 metres, the height of Shwedagon Pagoda.

“We’re very close friends with the landowner of that block,” said Moe Zaw, explaining how he became the agent.

With a permit and land, DCC has employed Moe Zaw and Scipio to advertise for a partner to bring in the necessary capital and construction expertise to build what is expected to be a multi-purpose office tower about 44 floors high with an estimated cost of up to $120 million.

“What we’re seeking is an international developer or somebody who can build to that standard,” said Brett David Miller, managing director of Scipio.

Amid a spate of new projects, their aim to oversee the construction of Myanmar’s tallest building is already facing stiff competition.

Last week, the Yangon City Development Committee, the local authority, told Miller it had recently issued a permit to the developer Asia World to build a tower in Yangon’s embassy district that could be 24 centimetres higher than the DCC project above sea level.

Miller insists that his client’s site is 51 centimetres lower, meaning that their tower would be the tallest if both projects are built to their permitted limits.

“We want this building to become an icon,” he said.

Neither operation has much of a track record building skyscrapers in a country that erected very few in the past amid years of stunted economic growth under the former junta.

Moe Zaw and Miller say that they hope to open what would be Myanmar’s first transparent bidding process for a private-sector construction project, something they admit they have never done before.

“The market as a whole needs to develop transparency and openness,” said Miller.

Asia World has plenty of construction experience but remains the subject of US sanctions due to persistent drug-trafficking allegations against company founder Steven Law. Company representatives were not available for comment.

As Myanmar plays catch-up, authorities are still passing regulations to improve the safety of skyscrapers. In February, the construction ministry’s quality control committee set new rules which require reinforcing underground construction and foundations, regulations that just about every other high-rise city in Asia has followed for years.

The timing in Yangon’s case is no accident. For years, only three developments reached above 20 storeys — Sakura Tower and Center Point Towers, both mainly offices, and Traders Hotel by Singapore’s Shangri-La Hotels and Resorts.

In recent months, a string of projects of a similar stature have broken ground.

In November, Shangri-La began building its 20-storey extension to Traders Hotel, a mix of offices and retail space, and in the third quarter of this year it plans to complete two 21-storey apartment blocks beside Kandawgyi Lake.

Living Square Company, which has sub-contracted Thailand-based Seafco Plc, is due to start building a 27-storey executive residence complete with penthouses and a rooftop helipad this month.

Vietnam’s Hoang Anh Gia Lai (HAGL) is also scheduled to break ground on an ambitious $440-million development of two 27-floor buildings in its first phase, and four 28-storey towers later, in a complex including offices, residences, commercial space and a five-star hotel.

Announcing the project in January, HAGL chairman Doan Nguyen Duc noted that the development was due to come onto a market close to its peak.

“It [Yangon’s property sector] will be around 80 degrees Celsius by 2018, an ideal temperature for real-estate developers,” he said in a statement.

Agents note that none of the large residential, commercial and office projects under construction are scheduled to be finished until the end of next year at the earliest. It’s a scenario that is expected to fuel what are already spiralling prices, a key reason many developers decided to invest in the first place.

Tony Picon, managing director of the Myanmar office of Colliers International, said that even though top-end office space is in very short supply, the recent surge in rents to levels higher than anywhere in Asia outside of Beijing, Shanghai and Tokyo has started to turn would-be tenants off. But there is little prospect of prices easing anytime soon, he added.

“New supply will come onstream but not enough to meet anticipated demand for the next five years,” said Picon.

As reforms continue and Western sanctions are scaled back, the influx of foreign companies has grown. Companies reluctant to lease increasingly expensive offices in Yangon have instead turned to apartments and residences to establish operations, further fuelling the property boom.

In a report released last week, Scipio forecast that Yangon’s residential leasing prices could climb as much as 46% in the second half of this year.

Demand will become even more acute, it said, following the recent announcement that Telenor of Norway and Ooredoo of Qatar have secured lucrative licences to operate mobile-phone services.

“Expect take up of most available 2- to 4-bedroom residences being offered within the market because of the mobile carriers’ entry into Myanmar,” said Scipio. “Expect the few residences currently under construction to be pre-leased.”

Later in the year, an influx of oil and gas companies is expected to further raise demand as the government awards drilling concessions, it added.

Land prices in the centre of Yangon have recently plateaued, however, said Moe Zaw. At the end of last year, Myanmar Deals Leasing was closing at least three deals per week but that has since slowed to one or two.

“The price hasn’t gone down, it’s just kind of slow, it’s not like it used to be before,” he said.

Well-off landowners in prime real-estate areas are holding out for higher prices in a market they know will only go up, said Moe Zaw. But many buyers have reached their limit.

The result is a ripple effect out of central Yangon to places like Bago about 70 kilometres northeast where plans have been announced for a new airport, and south of the Yangon River to Dala Township following the announcement of a new bridge. Dala land prices have risen about 300% in the past three months, Moe Zaw estimated.

The key driver, he said, is that people in Yangon increasingly have money to invest on the back of soaring foreign investment, more tourists, higher trade and more jobs.

“Whenever people make money — if they have extra money in hand — instead of putting money in a bank they just buy land,” said Moe Zaw. “Everyone knows you’re not going to lose money buying land.”