The new personal income tax rates for the 2013 tax year will likely be delayed, says Jitmanee Suwannapool, the Revenue Department's principal adviser on tax base management. 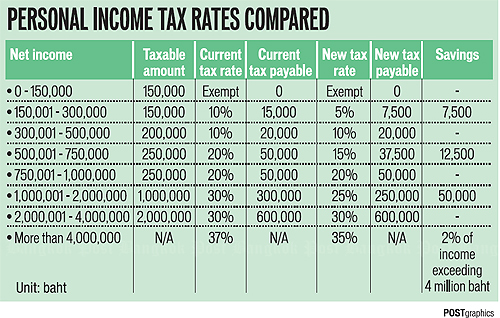 The draft of the new personal tax structure is being considered by the Council of State. After that, it will be submitted to the House for deliberation, said Mrs Jitmanee.

Should the government want to speed up the deliberation process to ensure the new rates take effect this year, it may propose a House vote on the three readings at the same time, she said.

The House's deliberation is typically a time-consuming process.

The top tax rate falls slightly, to 35% of taxable income from 37%, while the tax exemption for annual income below 150,000 baht remains in place.

The tax cuts are aimed at alleviating the burden of taxpayers, middle-income earners in particular, to boost domestic consumption, which has started to flag.

Weak demand in the West and China, along with uncertainty as to whether the state's huge infrastructure plans will kick off this year, has cast doubt on the country's growth momentum.

The National Economic and Social Development Board recently said full-year economic growth could sink to the lower end of its forecast range of 4.2% to 5.2% due largely to anaemic domestic consumption.

Mrs Jitmanee said taxpayers filing in 2014 must comply with the previous rates if the draft bill fails to take effect this year.

The Revenue Department expects revenue to come in slightly above the target of 1.77 trillion baht for fiscal 2013 ending Sept 30.

In the first seven months of fiscal 2013 (last October to April this year), the department collected 821 billion baht in revenue, a 16% rise from the same period a year earlier and 5.4% more than planned.

Meanwhile, an employee at a local media firm, speaking on condition of anonymity, said she must spend less and save more to plough more money into equity and retirement mutual funds than earlier estimated if the new tax restructure is delayed, for she has already planned tax payments for this year based on the new rates.

"I still hope that the new rates will remain on track, as I have already planned my spending budget this year," she said.

"I don't want to tighten my spending for the rest of the year."