Singaporean Jack Sim wants nobody to be embarrassed by toilets as he seeks to clean up sanitation throughout the developing world.

'Life is so fun for me. Every day I am able to dream up all kinds of crazy ideas to make toilets a subject of discussion," says Jack Sim. 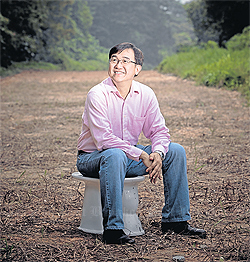 A man on a mission, Mr Sim demonstrates correct technique.

The 56-year-old Singaporean is making a Bollywood movie about toilets, which is set for release two years from now, and creating a toilet cafe{aac}. His plans include building the world's first toilet museum.

"Long ago, they threw shit on the road, so we needed high heels to protect ourselves," says Mr Sim, founder of the World Toilet Organization (WTO) _ a sarcastic abbreviation that mirrors that of the World Trade Organization.

"When I first started the WTO [in 2001], people did not want to talk about toilets, because they are unable to accept the fact that human beings produce smells. My first objective was to make the subject normal."

He asked for advice from Mr Condom [Mechai Viravaidya], who popularised condom use in Thailand, on how to transform a taboo into a sexy subject.

"He told me that if you can laugh at yourself and make people laugh, they will listen to you," says Mr Sim, who was a businessman for 16 years before setting up the WTO.

Growing up in Singapore, he saw how his homeland transformed itself from a Third World country into a developed economy within 25 years through entrepreneurship.

According to the UN Children's Fund and the World Health Organization, 2.5 billion people do not have access to adequate, clean sanitation. This led Mr Sim to set up SaniShop, a social franchise model, in Cambodia before expanding it to Vietnam, India, South Africa and Nigeria. Next will be Mozambique, Indonesia and the Philippines.

The franchise involves making toilets with a mould and cement costing US$1,000. Casting is done in the open air. It usually starts as a family business with a minimum of four people. The manufacturer earns $5 profit from selling a $45 toilet, while sales staff are usually village housewives who earn $2 commission every time they sell a toilet.

"Selling toilets is different from selling water, and some people prefer cellphones over toilets because they are a status symbol. So selling techniques are also important," says Mr Sim.

Although the current model is affordable for the middle-class poor, SaniShop is creating a new design for a $15 toilet for the lower-income group. The prototype of the cement toilet has been completed. Acceptance tests by users will be done before mass production starts in the next two months.

SaniShop's revenue comes from sponsorship and is used for training. Mr Sim hopes that one day it will become a business.

"We could do this by co-buying the products. Imagine that the volume is very large. We could negotiate with cement and plastic companies for deals and buy everything cheaper. We also want to bundle sanitation across other sectors such as drinking water, sanitation, solar energy, telemedicine, education and transport," he says.

"If you take all the genres and use a one-stop centre, then you don't need seven or eight overheads, which makes it easier to deliver. Revenue can come from making everything more efficient."

Mr Sim stressed that the idea of SaniShop is not based on profit but sustainability and that market forces can solve this issue much better than charity.

Many toilets donated by the World Bank, for instance, are used as storerooms.

"People are thinking: 'I've been defecating openly on the farm, so why must I have a toilet?' And for the girls, they're thinking this is the only chance they have to see their neighbours _ shitting next to each other and talking shit about their husbands and mothers-in-law," Mr Sim says.

"In many places, people use toilets until they become dirty and full. They don't know how to maintain them, then just leave them alone. But if they pay money, they will want to ask lots of questions before they buy it."

Mr Sim says donations should be transformed into a business model during the rehabilitation stage.

Mr Sim is optimistic that in 15-20 years the subject of toilets will be so normal that people will talk about the issue at the dining table.

Last month, Mr Sim lobbied Singapore's Foreign Ministry to make Nov 19, which is the founding day of the WTO, World Toilet Day recognised by the UN. The WTO holds a World Toilet Summit every year as the annual meeting for the world to meet to discuss how to solve toilet-related problems.

Mr Sim's work and initiatives on the toilet and sanitation frontier have reached an estimated 3.3 billion people worldwide.

"That's even more than Gangnam Style, and that's why I call it Hongnam [toilet] Style," he says.