Room to grow in Myanmar
Business

Room to grow in Myanmar

As the country opens up to foreign tourists, international hotel brands are rushing to improve its hospitality sector.

More international hotel chains are being attracted to Myanmar, where hotel rooms are in short supply but demand is brisk. 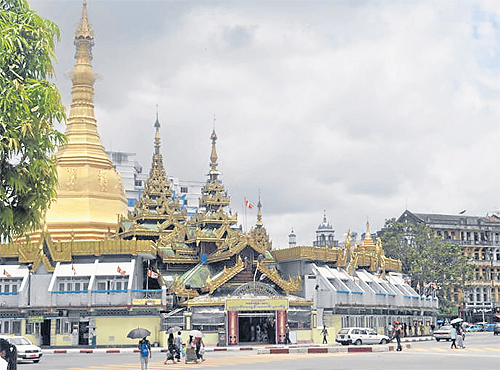 The Sule Pagoda is seen in the heart of central Yangon.

With Myanmar opening up to the world, its tourism is flourishing, but the supply of good hotels is not enough to serve foreign visitors. The business sector is also growing rapidly.

As Myanmar has just started its development, it will need more investment from abroad for at least 10 more years, Mr De Souza said.

Best Western in May announced its first hotel in Myanmar by taking over the management of the 189-room Green Hill Hotel, a six-month-old property in Yangon, the country's biggest commercial city.

Another four hotels are also under construction in Yangon. Two five-star hotels will be run by Singapore's Shangri-La Hotels, one by Thailand's Centre Point Hospitality and another by the Hong Kong chain Rose Garden Hotel.

Moreover, Hong Kong and Shanghai Hotels, operator of Peninsula Hotels, proposes to build a five-star facility to restore the colonial-era building of the former headquarters of the Burma Railway Company. 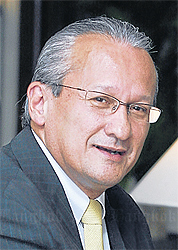 Last week, Best Western made a new move by clinching a management contract to manage the Grand Hotel at Nay Pyi Taw under its Best Western Premier label. It is due to open in the second quarter of 2014.

The 205-room hotel will be among the first internationally branded hotels in the new capital, which is the seat of Myanmar's government.

In hosting several major events including this year's Southeast Asian Games and major conferences, Nay Pyi Taw will experience a surge in business and leisure tourism in the coming years.

Service quality is an urgent issue for hoteliers, while Myanmar's hotel industry is facing a shortage of skilled labour.

Standardised hotel services will help to create value and increase room rates for hoteliers by at least 30%. The return on investment for building a hotel in Myanmar is 3-5 years, faster than the average of 10 years in other countries, he said.

Best Western also plans to expand its brand to Bagan and Mandalay, which are expected to become booming tourist destinations in the near future.

Myanmar could be a tourism competitor for Thailand, as it has a diversity of attractions from culture, nice coasts and coral reefs in the South to amazing snow-covered mountains in the North, but it will take at least 10 years to build basic infrastructure, Mr De Souza said.

Than Min Naing, the director of Eden Palace Co, the local investor in the Grand Hotel in Nay Pyi Taw, said know-how in hotel services, training, management and architecture will need to be imported from abroad.

The company's three-star Eden Palace Hotel focuses on local visitors. It will expand its hotels to other destinations such as Mandalay, Shan state and the Myeik archipelago, which features over 800 islands in the Andaman Sea.

Tun Tua Oo said many foreign investors have complained about landownership, so the Myanmar government has relaxed the law by extending land leases from 30 to 70 years (50 years followed by two 10-year renewals).

Moreover, it has extended a tax exemption period to five years from three years for foreign investors.

The government also granted a concession to foreign investors to restore old buildings under the build-operate-transfer (BOT) scheme.

Last year, Myanmar reportedly had 36 hotel projects, of which 30 have been completed, five remain under construction and one is a BOT project. These will create 6,700 rooms.

Singaporean investors made the highest investment of US$600 million in 12 hotel projects, followed by Thailand with $235 million for 10 projects and Japan with $183 million for six projects.

Though tourism is an important industry for Myanmar's economic development, the new investments must comply with environmental regulations.

The number of arrivals is forecast to reach 2.5 million this year, 3 million next year and 3.5 million in 2015.