As Asia will remain a major rice supplier, a regional rice strategy is emerging to improve production efficiency while addressing climate change issues as well as reducing post-harvest losses. 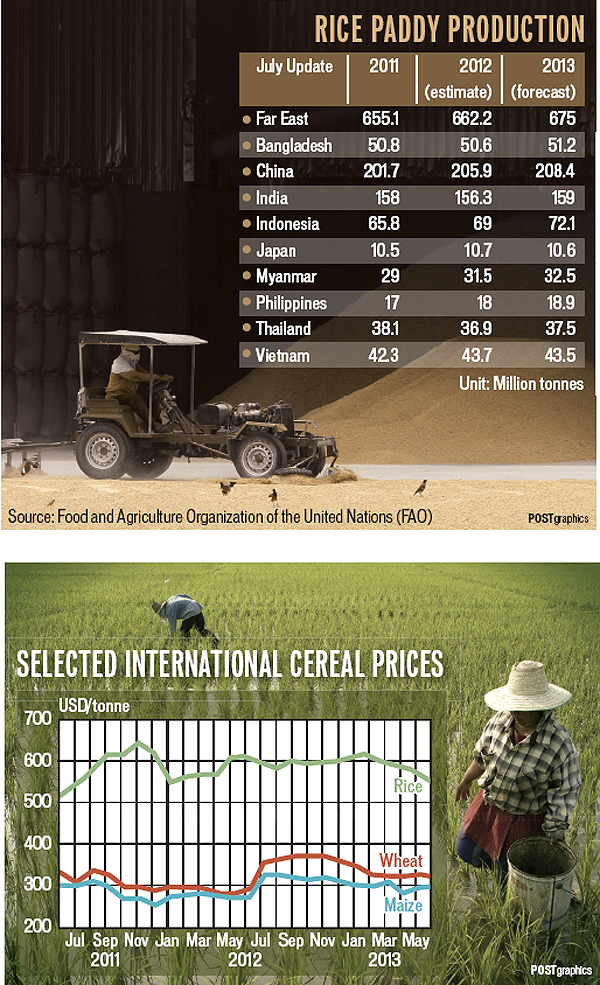 Rice exports from Asia continue to increase in line with rising demand from markets in Africa and the Middle East where people are eating more rice as incomes improve, according to Hiroyuki Konuma, assistant director-general and regional representative for Asia and the Pacific with the United Nations Food and Agriculture Organization (FAO).

The FAO, in collaboration with the World Bank and the Asian Development Bank, has been developing a regional rice strategy as requested by 46 member countries in Asia Pacific.

Expected to be completed by October, the study and its recommendations will be considered in March by ministers from FAO member countries, he said.

In its latest update released on July 19, the FAO forecasts world rice production in 2013 will expand by 1.9% to 500 million tonnes (milled equivalent) with strong gains in all regions except Europe and North America.

However, the forecasts are still provisional, as July and August are critical for the development of the main paddy crops in the northern hemisphere.

In addition, production growth this season could be dampened by expectations of falling prices and recent policy changes that may encourage farmers to shift to other crops, said the FAO.

Other uses of cereals, including industrial use and post-harvest losses, are projected to reach 473 million tonnes, up 3.7% from 2012-13.

Despite the overall anticipated increase in cereal production in most Asian countries, aggregate cereal imports in the 2013-14 marketing year are expected to rise by 6% from 2012-13 and remain 11% above the average for the preceding five-year period.

The increase is mainly attributed to higher forecast maize imports by China, almost double from the previous year, to meet high feed demand. Similarly, total wheat imports of the subregion are expected to increase by 1.1 million tonnes or 3%, following higher demand for the crop in China, Indonesia, the Philippines and Thailand.

Aggregate rice imports, on the other hand, are expected to decline, reflecting lower demand in Indonesia, China and South Korea because of improved domestic production.

Aggregate cereal exports in 2013-14 are forecast to increase by almost 7% from the previous year, following the estimated increase in exportable surpluses, particularly from Thailand (by 20%) and India (6%).

Wheat exports are forecast to reach an all-time high of 9 million tonnes, primarily because of an almost 50% increase in India to 7.5 million tonnes, given a bumper harvest and large carryover stocks. For rice, the subregion’s largest exported cereal, exports for 2013 are expected to remain similar to the 2012 level.

India and Vietnam are expected to export less rice than they did last year. However, this would be more than offset by an increase in exports from Thailand, as the government attempts to clear out massive stocks to make room for pledged paddy from the next harvest.

The FAO forecasts Thai rice exports at 8.2 million tonnes, an improvement of 17% from the poor 2012 performance.

Total cereal trade flows (imports plus exports) from Asia Pacific are expected to increase by about 6% during the 2013-14 marketing season.

Prices of rice show mixed trends while those of wheat have generally increased, according to the FAO. Overall, retail rice prices in local currencies remained generally stable in China, Indonesia, the Philippines and Sri Lanka and softened in other countries.

Price easing mainly reflected good harvests in the early-season crop and a decline in export prices from the main players in the region, Thailand and Vietnam.

In contrast, domestic rice prices firmed up in Bangladesh, India and Myanmar (reaching a record level) due to the large government procurement programmes and/or high exports, the FAO said.