In the globalised world, being able to communicate in more than one language is becoming essential for many people seeking rewarding careers. Young Cambodians have taken this message to heart and are learning new tongues to improve their chances of success both at home and abroad. 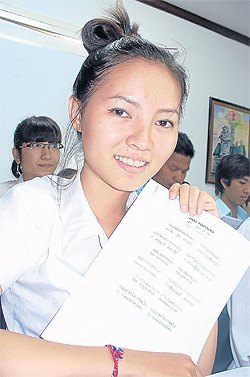 A Cambodian student holds a sheet containing the lyrics to the Loy Krathong song, which she is learning in her Thai language class.

“The seeds of foreign languages, especially English, were planted in Cambodia during the Untac mission back in the 1990s, when thousands of peacekeepers and personnel from around the world came in,” said Kay Kimsong, editor-in-chief of the Khmer edition of the Phnom Penh Post.

“From that point onward, learning how to speak English and understand the language well has become essential for any kind of advancement. It is how you can get access to the world and all the information from the internet.

“Other alternative languages such as Chinese, Korean, Japanese and Thai have also received great attention from local people; however each of them has various different purposes and [learners have different] expectations from what they choose to study.”

Cambodia is slowly moving up the development ladder but low-wage factory labour still predominates. Despite the increase in the minimum wage from $61 to $80 per month for workers in the huge garment sector in May, many workers still feel they are treated unfairly by employers. As a result, a lot of young people are looking abroad for study and work opportunities.

“I chose to study Thai, and I hope that one day I can go to Thailand for further study or work. Most people with higher education and qualified knowledge are constantly thinking about migrating out of the country and working abroad,” Bunthoeun Roeung, a 27 year-old credit officer at Canadia Bank told Asia Focus. “If the situation in Cambodia does not develop into something better, I really don’t want to live in this country anymore.”

Mr Bunthoeun says the combined earnings of the five workers in his family are still insufficient to support a good living. However, if only two of them could leave the country to work aboard, the higher incomes would be a big help.

During the first three months of this year, Cambodia sent 4,779 workers to Thailand, South Korea and Japan, according to official statistics from the Ministry of Labour. Most are working in factories and construction in Thailand, manufacturing, agriculture and fishing in South Korea, and in small industries in Japan. Migrant workers send home about $200 million a year, the ministry said.

According to Mr Kay of the Phnom Penh Post, South Korea has a solid reputation among Cambodians for higher pay and good working conditions, backed by a labour agreement between the two governments. South Korea thus a preferred destination compared with other countries, including Malaysia where reports of abuse and exploitation of underage workers have persisted.

Last year more than 7,000 Cambodians migrated to South Korea. Many young Cambodians are now interested in learning the Korean language, not only to work in the East Asian country, but also to serve as tour guides for Koreans or assistants to Korean investors in Cambodia.

“I want to study Korean and be able to speak the language fluently so that I can go and work in a factory there,” said Kheng Khenara, a 21-year-old university student in Phnom Penh. “I know many people who are already working there and most of them have a lot better lifestyle than here.”

Mr Kheng said his biggest concern was the mismatch between qualifications and the job skills required in Cambodia, where there are very few positions available for university graduates.

“I have found a lot of people with university degrees ending up as labourers in foreign countries because they cannot find jobs that require higher skills here. Therefore, we need to study other languages to move out,” he told Asia Focus.

While most of those studying Thai or Korean are looking to work abroad, those learning Chinese will find plenty of opportunities to use their skills at home, given China’s influence in the Cambodian economy.

“Apart from English, Chinese is becoming the second most popular foreign language in Cambodia,” said Som Ratana, director of the Department of Media and Communication at the Royal University of Phnom Penh.

“Part of the reason may be the strong relationship between the two nations, but the main issue is to do with the rising economic power of China. Many parents want their kids to study the language as they see it as the language of tomorrow.”

Given the rising number of Chinese investors in the country, being able to speak the language will be very beneficial, he added. According to a local association of Chinese-Cambodians, there are now about 30,000 full- or part-time students learning the language in the country.

“For Korean, Thai or Japanese, not that many Cambodians take the language as seriously; usually it is more like a ‘short course’ in which they learn enough to get along for daily communication if they were to work in those countries. But for English and Chinese, they really take their studies seriously, hoping it would help enhance their lives and social status.”

“Chinese is booming, nobody can argue about that,” he said. “My parents sent me to a Chinese school starting when I was young, and so far I think they have made the right decision. Once I graduate, I’m going to find a job in a Chinese company which usually pays higher than what local businesses pay.”

While young Cambodians’ enthusiasm for languages and career advancement is admirable, there is also a risk of a brain drain if too many talented people leave the country, said Mr Som.

“This is happening because the country cannot offer enough opportunities for our young population. These days, there are some students who can speak foreign languages better than Khmer,” he said.

“I hope that one day development in Cambodia will shape up and we can retain our talent by creating a path to let their careers blossom domestically. Only then can Cambodia catch up with its neighbours and the rest of the world.”