Amid a growing trend of sustainability, it is often hard for small and medium-sized enterprises to strike a balance between sustainable practices and profitability. 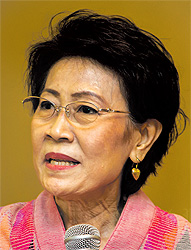 Darunee: GMOs are the only solution

The issue is even more challenging when it comes to food.

The UN Food and Agriculture Organization says food production must rise by 70% to feed an expected world population of 9 billion by 2050.

In Thailand, advocates of self-sufficiency have warned about the risks of technologies that enable growing crops in large amounts.

Darunee Edwards, president of the Food Science and Technology Association of Thailand, says genetically modified organisms (GMOs) are the only solution now for sustainable farming.

But as Thailand does not allow field trials of GMOs, there is no way to determine whether they are safe for the environment.

"It's clear the population is growing, but land is limited, so there needs to be sustainable technology such as GMOs, which have been shown in more than 20 countries to be able to solve this problem," said Mrs Darunee.

She said GMOs can lower the use of fertiliser and pesticides while raising productivity.

"If you ask me whether this is the equivalent of the green revolution, I'd say yes, as of now. And Thailand will fall behind the rest of the world if the country does not move forward," said Mrs Darunee.

Data compiled by ChileBio, a non-profit biotechnology group, show 610 scientific papers published in peer-reviewed journals have concluded that food derived from GM crops is safe for humans and animals.

Prof Ralph Christy, director of the Cornell International Institute for Food, Agriculture and Development in New York, calls sustainability a complex issue, with the rising population forcing policymakers to rethink the problem in every dimension.

In other words, how to protect the environment in which agriculture takes place while feeding 9 billion people?

"The green revolution started in this part of the world with rice," said Prof Christy.

"At that time, making farms more productive by simply putting fertiliser in with the seeds was really the magic bullet. But science now is indicating we're getting up to those yield ceilings. It's hard to get more out of each acre now." 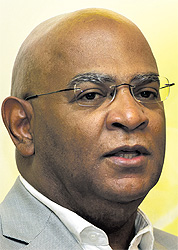 "So I don't think there's a quick answer to this. But to say I'm anti-chemicals and anti-GMOs and I want you to be competitive is a very tall order," said Prof Christy.

The other dimension is what happens after food is produced.

When food leaves the farm, 40% of it is wasted, which shows the need for better management along the agribusiness supply chain.

The percentage is even higher in developing countries with their pests, food spoilage and lack of cold storage.

Prof Christy said even though the science is fairly clear on what is known about GMOs, the decision to use them should be made by each individual country.

Developing nations often let developed peers make decisions for them for geopolitical reasons, "but if the policy is not to have GMOs, you have to define what are not GMOs".

Technological fixes are one part of the solution. Another is having good policies in place with respect to competition, human resources and transport.

Prof Louie Divinagracia, vice-president for academic affairs and dean of business at Indonesia's Universitas Pelita Harapan Surabaya, said with pressure to adopt safer technologies in trade comes a need to flush out the use of chemicals at farms.

Companies must also address poverty among farmers and introduce products for lower-income people, he said.

"Sustainable development must start from the heart," said Prof Divinagracia.

"Making a profit is not the sole consideration of business. It is profit plus social development." 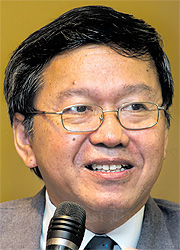