Students are allowed through the road blockade set up by protesting rubber farmers on the Ban Toon-Cha-uat road in Cha-uat district of Nakhon Si Thammarat Wednesday, but most vehicles are blocked. (Photo by Patipat Janthong)

Local community and business leaders called on protesters to lift the road and railway blockade in Nakhon Si Thammarat Wednesday, as the government and planters failed to reach an agreement in their latest round of talks on rubber prices.

Protesting rubber farmers have blocked the main highway to the South at Kuan Nong Hong in Cha-uat district since last Friday and closed a railway crossing at the Ban Toon-Cha-uat road since Monday to pressure for higher rubber prices.

Demonstrators have warned they will begin to block roads in the North and Northeast as well from next Tuesday if their demands are not met. 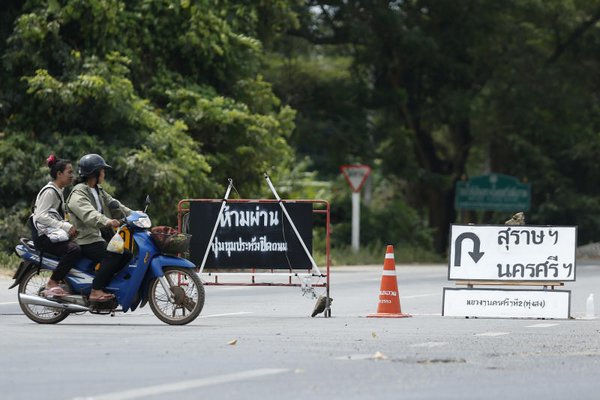 Signs have been put up in Nakhon Si Thammarat, warning motorists there is no through traffic on Highway 41, blocked by the protests. (Photo by Patipat Janthong)

Pensri Thongboon, head of a group of village leaders, said local people in Cha-uat district wanted the protesters to reopen the road and the railway.

She said Cha-uat growers were a minority among the protesters and most came from other provinces like Phatthalung. She asked them to demonstrate in their home provinces instead.

Cha-uat district chief, Sakchai Chai-chua, said that because of the blockade, seriously ill patients at Cha-uat Hospital could not be referred to Maharaj Nakhon Si Thammarat Hospital and had to be sent to the less well-equipped Phatthalung Hospital instead.

Seree Thanadsornsarn, president of the Tourism Association in Nakhon Si Thammarat, said the protest could tarnish the province’s image among tourists.

The government stood firm Wednesday in its stance that it would not intervene in rubber prices.

Finance Minister Kittiratt Na-Ranong said the government had agreed to allocate 20 billion baht to help increase the incomes of rubber farmers instead.

Deputy Prime Minister and Agriculture and Cooperatives Minister Yukol Limlaemthong also stood firm that the government would not bow to rubber growers’ demands.

After five hours of negotiations with representatives of rubber farmers from all regions of the country at Government House Wednesday, Mr Yukol said the government would spend 5.6 billion baht to subsidise the fertiliser costs of about 980,000 rubber farmers who collect latex.

Each rubber farmer eligible for the sum could borrow up to 31,500 baht via the BAAC and the financing would be available for seven months, he said.

Farmers’ representatives appeared to lack unity during the talks.

About 10 farmer representatives, led by Veerasak Sinthuwong of the Network of Thai Rubber Farmers, walked out after Mr Yukol rejected the demand that the government guarantee the raw sheet rubber price at 92 baht/kg.

Mr Veerasak said rubber farmers would continue with their plan to stage nationwide road blockades from next Tuesday.

But Terdsak Sermsri, head of the Thailand Rubber Farmers Network, said although the government rejected the demand for a price guarantee, it offered short-term assistance that could be acceptable until the end of the latex collecting season next March.

He urged rubber farmers to register for the assistance and keep their demonstrations peaceful. 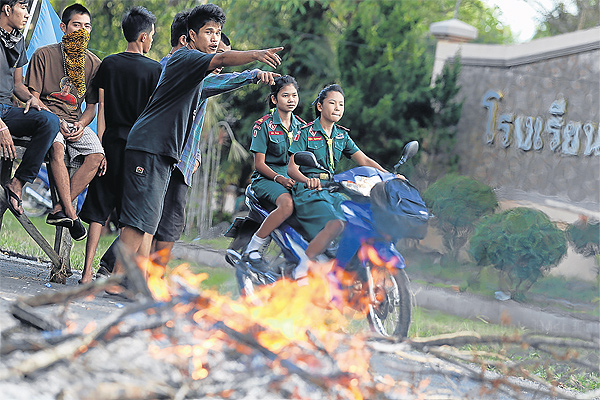 Students drive a motorcycle to school past the road blockade set up by protesting rubber farmers on the Ban Toon-Cha-uat road in Cha-uat district of Nakhon Si Thammarat yesterday. The protest site remains off-limits to most vehicles. PATIPAT JANTHONG