Warning over fake ringgit in South

The Thai Association of Foreign Exchange is warning the public about the widespread of use of fake foreign currencies in Thailand, particularly in the southern provinces, where Malaysian ringgit is the most commonly faked note. 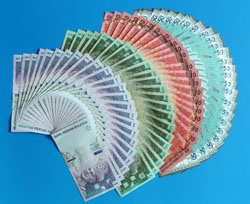 The Malaysian ringgit is the most commonly faked currency in Southern Thailand. (Bloomberg file photo)

Chanaporn Poonsuphirun, the association’s president said the counterfeit ringgit notes are very realistic, so difficult to differentiate from the real thing.

She said fake ringgit notes are being discovered from Chumphon down to the border with Malaysia, due to high numbers of Malaysian visitors to Southern Thailand.

She said the association is trying to educate employees working in exchange shops in the South to detect fakes. It is also training personnel in exchange shops nationwide about cancelled banknotes, so they avoid accepting notes that are no longer usable.

Ms Chanaporn said some retirees are currently attempting to diversify their investments by buying foreign currencies for speculation purposes, but the association warned people against doing so, due to the high risk associated with such a strategy.

She said it would be difficult to exchange the money back to Thai baht when retirees want to gain from the exchange rate, because exchange shops often lack sufficient capital to support such speculation, and normally only hold 10-20 million baht each in foreign banknotes.

Currently, there are around 1,300 exchange shops operated under licences granted by the Bank of Thailand but there are also more than 1,000 shops operated without licences. The association is planning to work with the Central Bank to draw these unlicensed shops back into the legal system.

Ms Chanaporn said there is currently a shortage of specialist staff in the industry, because it takes at least two or three years to train a person in examining foreign banknotes. She said the base salary for a skilled worker should be between 20,000-30,000 baht a month.

The association said many businesses are competing against one another for skilled staff, so are attempting to attract the best workers through employee incentives such as profit sharing.