Abandoned since 2006 but briefly used to shelter about 800 victims of 2011's great flood, the derelict Terminal 2 (T2) at Bangkok's Don Mueang airport is getting a new lease of life. 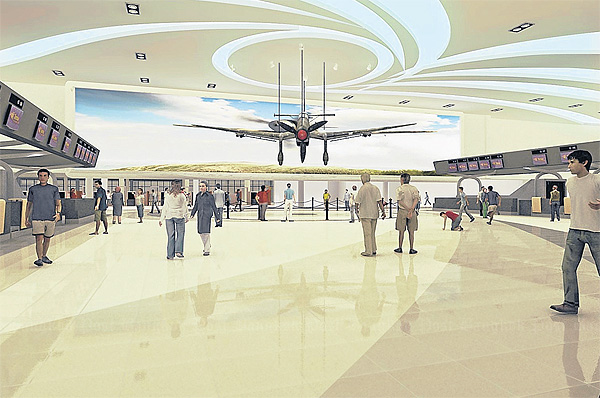 An artist’s rendition shows a life-sized replica of a vintage aircraft in the revamped Terminal 2, reflecting the long history of Don Mueang airport, one of the world’s oldest.

T2 could come alive as early as next May, sooner than expected, if Airports of Thailand Plc (AoT) has its way.

Its 3-billion-baht renovation plan is expected to be endorsed soon by the National Economic and Social Development Board (NESDB), the state planning agency.

While waiting for the green light, AoT will carry out other works in order to meet its ambitious completion deadline.

AoT is putting the renovation of T2 and other supporting facilities, which were earlier planned for November 2014, on the fast track in a bid to ensure additional capacity to arrest soaring air traffic demand, just before Terminal 1 (T1) becomes overcrowded.

T1's passenger throughput this year will likely reach 16 million against its annual capacity of 18.5 million. Completion of T2 will raise Don Mueang's passenger capacity to 30 million a year.

"May 2014 is our goal for T2 renovation, and we're committed to achieving that date no matter what," said airport general manager Chaturongkapon Sodmanee.

The renovation blueprint was submitted to the NESDB in July, and AoT is relatively optimistic of getting an endorsement due to the importance the government has placed on aviation infrastructure development.

In the meantime, AoT will start work on wall and ceiling panels, air conditioners, electricity wires and plumbing systems at T2 this month.

AoT will resort to "special" procurement means to seek suppliers and contractors to get the jobs done quickly rather than getting stuck in bureaucratic systems normally related to awarding state contracts.

Though listed on the Stock Exchange of Thailand, AoT has state enterprise status due to its majority state ownership and is subject to procedural compliance.

A stripping exercise costing 4 million baht is expected to take one month, paving the way for other phases of work.

The renovation will result in a major facelift for T2 and a new look that will represent a big leap from when it was built more than two decades ago.

T2 will become a modern-day passenger terminal, with amenities that today's passengers have come to expect.

According to the design concept, developed by AoT's in-house team and seen by the Bangkok Post, the most visual impact takes place in the check-in hall on the building's third floor, where a light-brown hue will be adopted.

At the centre, a life-size replica of a vintage aircraft will hang from the ceiling against the backdrop of a huge 30-x-5-metre digital display showing images of the skies and flight information.

The hall will have granite-like tile flooring and LED lighting.

There will be 80 check-in counters, down from 92 currently, with six check-in islands remaining unchanged, thus providing a more spacious feel.

Toilets will receive major improvements, with 300 stalls furnished with modern fittings and lay-out.

An outdoor gallery, measuring 280 m in length and 20 m in width on the fourth floor, will allow passengers to watch live aircraft movements - a new feature.

Space allocated for commercial use, such as restaurants and shops, will be doubled in size, while an outdoor smoking area of 20 sq m will be set aside.

The renovated T2 will be used for domestic passengers, while T1 will subsequently get a multibillion-baht improvement.