Tariff cuts on luxury goods will be 'selective'
Business

Tariff cuts on luxury goods will be 'selective' 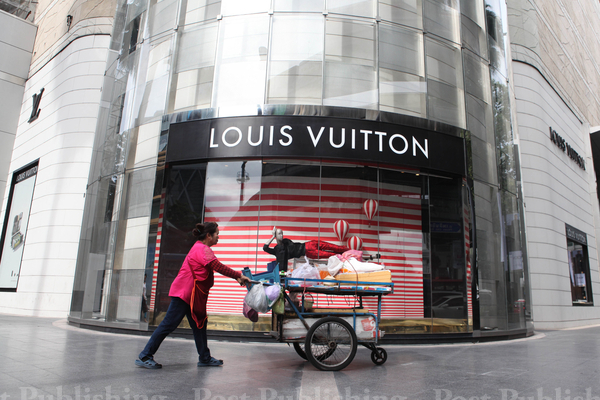 A vendor who earns a basic living pushes his cart outside a brandname shop, where a bag sometimes costs as much as he earns in a month, in a tourist areas of Bangkok in August, 2013. Photo by Seksan Rojjanametakun

She was responding to a report that the ministry is considering a cut in import tariffs on luxury products, from 30% to around 5%, to help position Thailand as a shopping paradise for both Thais and foreign visitors.

She said Thailand already has very low import duties on products such as cameras and accessories, which means these products sold in Thailand and are already lower priced than in some countries like Hong Kong.

However, a reduction on import duties on brandname products would help gain recognition as a shopping destination and also encourage more people to shop locally.

Thais are listed among the top five world shoppers for brandname  goods. The Chinese are the world's top shoppers based on claims for value added tax refund from Global Blue, which tracks refunds, Mr Lavaron said.

A ministry source said the proposed cuts in import tariffs would cost the government over 100 million baht in direct lost revenue, but there would be a greater return to the country in terms of corporate income tax, employment, and from hotels and restaurants.

The Fiscal Policy Office is studying the likely impact of the proposal on Thai industry, but still has insufficient information from private sector to draw a conclusion,  he said.

An alternative was to reduce import duties only on products with no domestic production equivalents, such as brandname perfumes or high-end watches.

The source said the tariff charged on imports of brandname products is not a high portion of the retail cost. The high prices of  these products sold in Thailand was due more to the high profit margin collected by distributors.

From Moscow to New York, fast delivery takes off amid pandemic