KPN Group Corporation, owned by the Narongdej family, plans to launch a luxury condo project worth 2.7 billion baht in Bangkok next month amid soaring land prices and limited condo launches in the area. 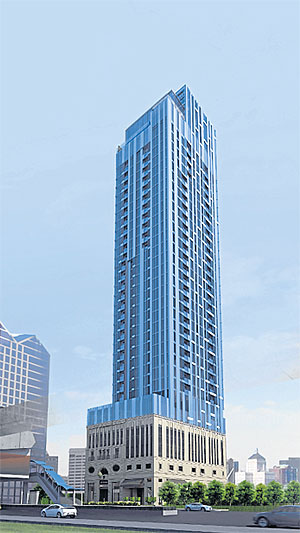 An artist’s conception of The Diplomat Sathorn, which boasts 192 units.

The group early this year bought a 1.5-rai plot on North Sathon Road near Surasak skytrain station from the Komarakul Na Nakorn family where the family's house aged more than 100 years was located.

KPN purchased the plot at 1.2 million baht per square wah, while Land and Houses Plc bought a piece of land opposite on South Sathon Road at 400,00 baht per sq w four years ago, according to a property industry source.

KPN will develop The Diplomat Sathorn on its plot, comprising a 38-storey building with 192 units sized from 40 to 203 square metres and priced 200,000 baht per sq m on average, with a starting price of 7.9 million baht.

"The target group is people living nearby, investors looking for a condo near mass transit, parents and expats," Mr Kris said.

KPN has 30% presales and targets to close sales by the end of the year. Construction will start in May 2014 and be completed by the end of 2016.

KPN's business plan is to develop two high-rise condo projects per year, with target locations either the CBD near skytrain lines or other locations near underground train stations.

It expects to realise 3 billion baht in revenue next year from two projects in the Ratchaprarop Road area and Ekamai-Thong Lor area.

Aliwassa Pathnadabutr, managing director of property consultant CBRE (Thailand), said a limited number of condo units are launched in the CBD each year.